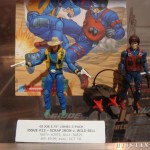 Check out some new shots of upcoming GI Joe product from the Hasbro Booth at Comic Con 2008! Included are new 2 packs, along with new shots of the Rattler and Conquest. Also seen are wave 1 combat heroes. The new figures shown are as follows:

Check back often for more Images of the Hasbro Booth including G.I. Joe, Transformers, StarWars and more……..
To view the new Images click the Title Bar.