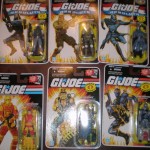 Modern era wave 13 has been released! This wave has been found at a art2614’s local comic shop, so it is only a matter of time before we see widespread release! We can now have the first looks at the Resolute Cobra Trooper, Resolute Duke, Repaint Firefly, and a closer look at Blowtorch, Dreadnok Torch, and Resolute Cobra Commander!