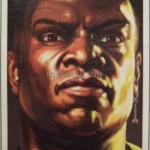 Heavy Duty combines brains and brawn to support the G.I. Joe Team with tactical expertise and muscular might. He knows the optimal weapons to use in any situation and will never stand down until every last Cobra is defeated.