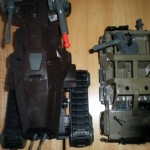 HISS Tank boards member Gyre-Viper has posted all new images of the upcoming H.I.S.S. Tank from G.I. Joe Pursuit of Cobra! The Pursuit of Cobra HISS Tank features opening cockpits for both the driver and gunner. Included is a H.I.S.S. Driver with a mix of parts from previous figures.

Also shown is a new 4 wheeled, VAMP like vehicle, with a new driver! The name of included Joe is unknown at this point. Also worth noting are what could be the return of modular weapons ports! We’ve seen these used on the movie PIT, but haven’t seen widespread use ever since the DTC and Sigma 6 lines.

Both of these vehicles and their respective drivers are shown in prototype form. Yet we can already tell that the level of detail shown on these vehicles is a significant jump from what we saw in the Rise of Cobra line! Click on the title bar to take a look!