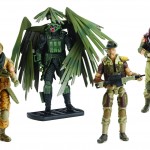 The following was released today:

Pursuit Of Cobra WAVE 2: The evil schemes of Cobra are thwarted throughout the world by the noble soldiers of G.I. Joe, and their battles can be replayed time and again with the G.I. Joe action figures! Each figure stands 3 3/4″ tall and comes with accessories. Fans can choose from Zartan (Version 2)*, Recondo, Destro (Version 2), Jungle Viper, Snake Eyes (Version 2), Dusty, and many more. Blister card packaging.

GI JOE BRAVO VEHICLES WAVE 2: Stage your own battles between the forces of G.I. Joe and Cobra with the all-new G.I. Joe Bravo Vehicles, scaled to the 3 3/4″ figure height! Choose from the Vamp 4×4 with Double Clutch, or the Cobra Fury with Alley Viper.

GI JOE ALPHA VEHICLES WAVE 2: Take your Joe and Cobra forces into battle with these 1- and 2-man vehicles, scaled to the 3 3/4″ figure, each with its own exclusive pilot/driver! Collectors can choose from the A.W.E. Striker, which comes with Nightfox, or the Cobra Ice Cutter, which comes with Snow Serpent.