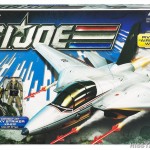 CAPT. ACE would rather fly than do anything else. He was a civilian pilot in Alaska then worked as a stunt pilot before joining the Air Force to become a combat pilot. He has an intuitive knack with any kind of aircraft and an equally uncanny gift as a poker player. He can coax the most out of any plane and almost always holds the winning hand in a game, without even cheating.

You’re ready to “fly” to wild victories with this G.I. JOE Combat Jet Sky Striker XP-21F vehicle! Open the cockpit to put the included CAPT. ACE figure in the pilot’s seat and slide the lever to pivot the wings forward and back! Deploy the retractable landing gear when it’s time for a speedy landing and retract it during “takeoff.” Load the missiles for maximum firepower!