This past Friday, The Hub, a partnership between Hasbro and the Discovery Channel, announced their line up for 2012 & early 2013. Sadly, no G.I.Joe related programs are listed on the roster.

Although The Hub will continue to air programs such as Transformers Prime and air new shows like Littlest Pet Shop and Kaijudo Rise of the Duel Master, there’s no site of our favorite 3 3/4″ Modern Military Figure.

Although there have been rumors that there was to be a second season of G.I.Joe Renegades and other rumors of a new cartoon that picks up where G.I.Joe Retaliation leaves off…it doesn’t look like either have any foundation.

LOS ANGELES, March 1, 2012 /PRNewswire/ — Programs based on iconic names and strong, beloved properties are among the four new original series that will join eight returning popular original series on The Hub TV Network’s 2012-2013 programming lineup. The announcement was made today by Margaret Loesch, President and CEO of The Hub, a TV network for kids and their families. The new series continue the network’s strategy of building a schedule with programs based on well-known brands. The Hub launched October 10, 2010, replacing the former Discovery Kids Network.

Among the new original series coming to The Hub are the animated series “Care Bears: Welcome to Care-a-Lot,” “Littlest Pet Shop,” “Kaijudo: Rise of the Duel Masters” and the new live-action series “Spooksville” based on the popular tween book series from Christopher Pike.

In addition, The Hub announced the acquisition of the popular live-action series “The Facts of Life,” “Mork & Mindy” and “Sabrina The Teenage Witch.”

The program announcements were made in advance of The Hub’s advertising upfront events in New York (March 1), Chicago (March 8) and Los Angeles (March 15).

“With the momentum of our successful first year, we’re building a slate of programs for the 2012-’13 season that continues our strategy of presenting series based on well-known names and beloved properties in the kids and family entertainment space,” said Ms. Loesch. “One of our advantages has always been the built-in strength and recognition of our programming. The success of that is evident in our large number of returning original series and in the exciting new original series. We’re confident that this lineup will further define us as the entertainment destination for kids and their families.”

The first of the new series to appear on The Hub will be “Kaijudo: Rise of the Duel Masters” an all-new, action-packed animated series from Hasbro Studios premiering this summer. The series features the voices of popular actors Scott Wolf (“Party of Five”), Freddy Rodriguez (“Ugly Betty”), John DiMaggio (“Futurama” and “Pound Puppies”) and Phil LaMarr (“Mad TV”). “Kaijudo: Rise of the Duel Masters” is an animated action-fantasy series that follows the adventures of a young hero, Ray, who possesses the rare ability to befriend and duel alongside fantastical creatures from a parallel dimension. The series is based on a re-imagination of the wildly successful Duel Masters property in Japan by Wizards of the Coast (Magic: The Gathering and Dungeons & Dragons) and Hasbro, Inc.

“Kaijudo: Rise of the Duel Masters” (Hub Original Series)
This animated action-fantasy series follows the adventures of a young hero, Ray, who possesses the rare ability to befriend and duel alongside fantastical creatures from a parallel dimension. Evil forces would have these creatures tamed and enslaved, so Ray and his two best friends must join the ranks of the mysterious Duel Masters to ensure the survival of both races before it’s too late. Produced by Hasbro Studios, the half-hour series premieres all 26 episodes starting this summer on The Hub.

“Spooksville” (Hub Original Series)
Based on the acclaimed book series by author Christopher Pike, the new kid in town discovers that he holds the key to a battle between good and evil that has been taking place for centuries in a bizarre small town that plays host to a wide array of supernatural and unexplained occurrences; only to learn that his family is right in the center of the mystery. From Producer Jane Startz, the half-hour series is expected to premiere in the fourth quarter of 2012.

“The Facts of Life”
A group of girls attending a boarding school experience the joys and the trials of adolescence under the guiding hand of housemother, Edna Garrett (Charlotte Rae). Distributed by Sony Pictures Television, the half-hour series is expected to premiere in the second quarter of 2012.

“Mork & Mindy”
Mork (Robin Williams) is a wacky alien who comes to Earth to study its residents, and the life of the human woman with whom he boards is never the same. Distributed by CBS Television Distribution, the half-hour series is expected to premiere in the second quarter of 2012.

“Sabrina The Teenage Witch”
Sabrina Sellman (Melissa Joan Hart) is a teenager with magical powers living with her two aunts Hilda (Caroline Rhea) and Zelda (Beth Broderick) and their magical talking cat, Salem. After discovering at age 16 that she’s a witch, Sabrina is counseled by her aunts and even the cat in growing up magical. Distributed by CBS Television Distribution, the half-hour series is expected to premiere in the second quarter of 2012.

THE HUB is a multi-platform joint venture between Discovery Communications (NASDAQ: DISCA, DISCB, DISCK) and Hasbro, Inc., (NASDAQ: HAS) with a goal of entertaining, enlightening, empowering and educating children and their families. The cable and satellite television network features original programming as well as content from Discovery’s library of award-winning children’s educational programming; from Hasbro’s rich portfolio of entertainment and educational properties built during the past 90 years; and from leading third-party producers worldwide. The Hub lineup includes animated and live-action series, as well as specials, game shows, and family-favorite movies. The network extends its content through a robust and engaging online presence at www.hubworld.com. The Hub rebranded from Discovery Kids on October 10, 2010, and reaches more than 64 million U.S. households. The Hub logo and name are trademarks of Hub Television Networks, LLC. All rights reserved.

To find the channel in your area, please visit http://www.Hubworld.com and check the channel locator at the top of the page. 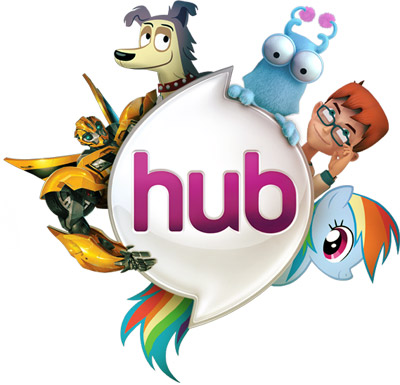