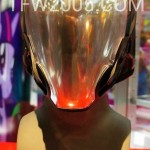 Fresh from the show floor in San Diego we have our first images from the 2012 San Diego Comic-Con coming in! On display in Hasbro-land are several of the figures from the first waves of G.I. Joe Retaliation figures to hit in 2013, along with a few Alpha vehicles.

Also of note on display appears to be a replica of Cobra Commander’s helmet from the movie, and Firefly’s Motorcycle!

Stay tuned to HISSTank all weekend long for more from San Diego Comic-Con!