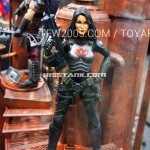 Not to be outdone by the sinister Major Bludd, we now have images of Sideshow Collectibles Baroness Figure!

This beautiful rendition of Cobra’s First Lady is a stunning representation of the Baroness and a welcome addition to the ranks of Sideshow Cobra figures.

Are you planning on adding her to your collection? Sound Off on the HissTank forums! Ruthless and Beautiful.

The Baroness is a pivotal figure in the COBRA hierarchy and one of it’s chief architects of terror. Her life began as the daughter of a wealthy aristocratic family in Europe. In her youth, she was an active participant in student radicalism which planted seeds of hostility, chaos and disorder. From those seeds sprouted a woman whose anger and disregard led her into the world of international terrorism. With her wealth, connections and skills with weapons, explosives and disguises, she became highly sought after by those who knew how to utilize such skills. One who took notice was the maniacal, ruthless leader of the COBRA organization. Dubbed ‘The Baroness’ she assisted COBRA Commander in planning and conducting daring kidnappings, shocking assassinations and wreaking general havoc with little to no regard for innocent lives.

The Baroness quickly climbed the ranks of the COBRA organization and played an integral part in the ongoing rivalries within the upper tiers of the terrorist organization. Having a long relationship with the mercenary weapons supplier Destro, her loyalty to COBRA has wavered at times between the two but almost always stayed with COBRA in an ongoing effort to climb and claw her way to the top of the organization. She is a vile, sensual, manipulative, beautiful, deadly and extremely intelligent terrorist mastermind. She is, without doubt, one of the GI JOE teams top adversaries and certainly will not be taken captive without a violent battle ensuing.