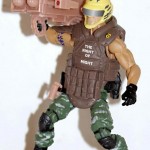 This years NJCC 2013 Custom Exclusive Giveaway will be Salvo! One of my favorite characters from the G.I.JOE Universe series and one of the missing Joe Team Members that have not yet been produced. Special thanks to Kevin Watts for providing us with mock up images of the upcoming show exclusive.

Much like last years Metal Head, we plan on having a custom card with new card art by New Jersey Collectors Con 2013 guest Dan Khanna

Salvo is the G.I. Joe Team’s Anti-Armor Trooper. His real name is David K. Hasle, and he was born in Arlington, Virginia. Salvo was first released as an action figure in 1990 with the t-shirt slogan ‘The Right of Might’.

New Jersey Collectors Con is just a little less then one month away! April 28th, 2013 NJCC comes to life bringing G.I. Joe, Transformers and ThunderCats and 80’s Toys together under one roof. We have a killer dealer room for this spring and many more updates to come, Stay Tuned!

More information on the Salvo Custom Giveaway figure after the jump. Mark Bellomo will be attending NJCC as a special guest, promoting his work on the new book G.I. Joe: The Complete Collection, the full run of original Real American Hero, Special Missions, and Yearbook tales, placed in proper reading order and collected in handsome hardcover volumes.

Mark Bellomo has written more than 150 articles for ToyFare, Wizard Magazine, Lee’s Toy Review, Tomart’s Action Figure Digest, and most recently for Toy Shop Magazine, where he served a lengthy tenure as their Action Figure Columnist. He has written a number of composition/rhetoric texts, has published critical literary articles, and has authored a number of bestselling books on action figures and pop culture: Warman’s Action Figures Field Guide, Transformers: Identification & Price Guide, Warman’s Field Guide to Transformers, The Ultimate Guide to G.I. Joe: 1982-1994 (1st & 2nd editions), and the recently-released Totally Tubular 80’s Toys. Bellomo contributes three chapters each year to Toys & Prices (2007 2011), and has also been featured in The Collectable Spectacle currently posted on YouTube.

Make sure to check out all of Mark Bellomo’s Books At Amazon.com

Join the Conversation! › This Years NJCC 2013 Custom Exclusive Giveaway Salvo ‘The Right Of Might’ Discussion