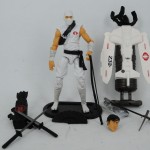 
Interestingly enough, all of the figures are shown with blank stands(seems like the same stands that came with the Amazon 4 pack) while Storm Shadow is pictured with an alternate unmasked head from the Paris Pursuit Storm Shadow figure. With these figures appearing up for auction now, it might not be much longer before these arrive to retailers in the US. Read on to check out the new images!

EDIT: An auction for Ultimate Snake Eyes has turned up, images have been attached! It appears that the head sculpt used is from the GI Joe Retaliation Ninja Duel Snake Eyes in lieu of the new head sculpt that was shown previously at JoeCon/Toy Fair.