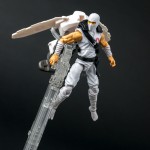 Retaliation Wave 3.5 = DONE! 4 days, 12 figures, over 400 pictures. We conclude our high resolution galleries of G.I. Joe Retaliation Wave 3.5 tonight, arguably one of the best collective cases of G.I. Joe figures ever produced, with Ultimate Storm Shadow. Storm Shadow is an upgrade of previously released Renegades/30th Storm Shadow, this time giving us a more ARAH chest and head to go along with the crazy weapons and accessories that came with the Renegades version. He also comes with a redeco of a previous glider accessory done up to look like Cobra Claw.

Check out over 50 images of Ultimate Storm Shadow in the HissTank Database here!

Make sure to hit Discuss and let us know what you think of this wave on the forums!