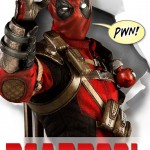 Sideshow has posted the pre-order page for their upcoming Deadpool Sixth Scale Figure. Expected to ship in October 2015, Deadpool will come armed to the teeth. Included are numerous guns, swords, grenades, and a knife. The figure also includes numerous interchangeable hands, a hand tailored costume and two swappable heads. The Sideshow Exclusive version will include Headpool with Float Wire. Best of all, Deadpool will include two word bubbles that can be altered with numerous Deadpool-isms or Deadpool-themed emoticons. The figure is priced at $229, and you can pre-order it Here.

See all of the photos after the jump.