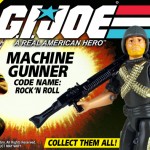 Big thanks to our friends Dreamwalkeroso and the team at Gentle Giant for sharing images and details behind their first G.I.Joe Jumbo Figure Release, Rock N Roll!

That’s right! The first soldier out of the gate is the G.I.Joe Machine Gunner and wow, talk about an instant feeling of nostalgia! The figure looks amazing and there’s a gallery of images waiting for you to enjoy after the jump! First, let’s get to the details on good ole RnR –

I don’t know about you, but I can’t wait until next year! You can check out more images of this future addition to your collection and join in on the discussion after the break!