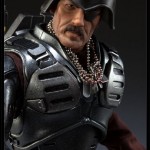 Sideshow Collectibles presents the Major Bludd Sixth Scale Figure. The COBRA organization’s go-to mercenary gets the Sixth Scale treatment, joining our acclaimed GI JOE Sixth Scale figure series. Fully loaded with an impressive array of weaponry, along with a highly detailed costume and accessories, Major Bludd is a must have addition for any JOE or COBRA collector.

many more Major Bludd Sixth Scale Figure images after the jump. Feared, merciless and despised; all traits of a brilliant tactician, war criminal, mercenary, murderer and yet another scale in the COBRA organization. Born in Sydney Australia, Major Sebastian Bludd served in the Australian Special Air Service Regiment, the French Foreign legion and as a third world military adviser for hire prior to his involvement with the terrorist organization known as COBRA. Loathed and wanted around the globe for his many crimes and disregard for human life, this ruthless mercenary is proficient with a staggering variety of weapons and combat skills, all of which are wielded by a razor sharp tactical mind. Bludd has served the role of field commander and assassin for COBRA, but he has no loyalty except to himself and his bank account. Cold and calculating, not even COBRA Commander trusts Bludd. He has been involved in plots within the COBRA organization and high command which would cause many to question the Commander having Bludd on the payroll. Many within COBRA keep him at arms length so as to not let him get to close. His skills though would persuade even his most hated enemy to recognize his talents, albeit with disgust. One would not think this evil killer would have a passion for poetry unfortunately his poetry lacks the skill he possess in combat. Major Bludd is an asset to COBRA (if the price is right) and loathed enemy of the JOES. No pity. No compassion.