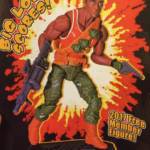 Big Lob is a former basketball player who speaks in sports commentator jargon. His real name is Bradley J. Sanders, and he was born in Chicago, Illinois.

Big Lob first appeared in G.I. Joe: The Movie, voiced by Brad Sanders. He is established as a member of the “Rawhides”, a group of new Joe recruits (including Chuckles, Jinx, Law & Order and Tunnel Rat) trained by Beach Head.

Big Lob had no action figure or comic book counterpart until 2010, when his figure became available as a G.I. Joe Club exclusive. He was listed as a reserve member of G.I. Joe during the America’s Elite comic series, and is seen on a map as having been deployed as part of the Joes’ efforts to battle Cobra Commander’s forces worldwide during the “World War III” storyline.

Join the discussion after the jump!