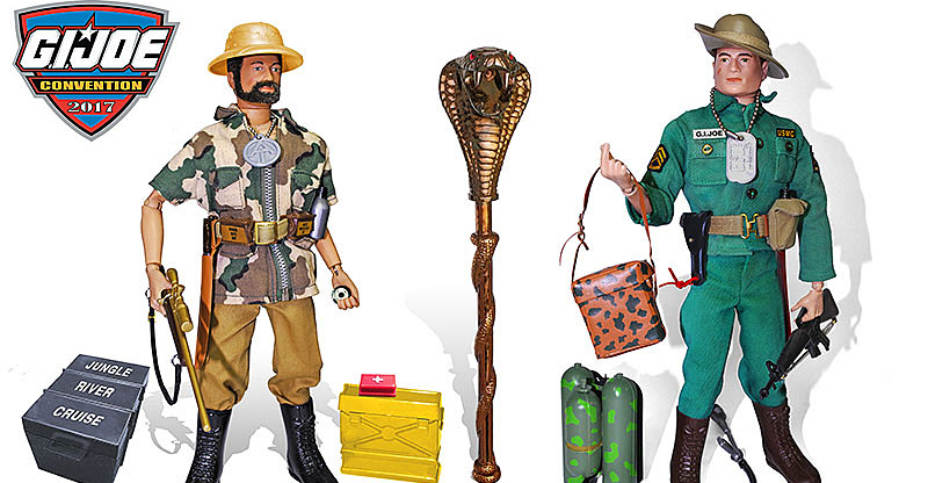 The G.I.Joe Collectors Club has not only revealed the theme for the GIJoeCon 2017 Modern Era Box Set, but has also revealed their 12″ offerings! Check it out –

Back in in the war G.I. Joe was a specialist serving as a Marine Jungle Fighter. During an undocumented mission in and undocumented area, something went terribly wrong and they were being over run. As he was evacuating due to an impending air strike, he fell into some sort of ancient buried temple that appeared to have something to do with the worship of snakes. Using his flamethrower for illumination, he realized that… the snakes were still there! As he was fighting his way out through the snakes something caught his eye, a golden cobra shaped staff. There was no time to get to it out. The airstrike was inbound and he had to evac!

For years this memory haunted Joe and led him to his current career in the Adventure Team as their Jungle Explorer. Where was the old temple? Was that golden staff still there? Did it really happen, or was it just a hallucination? He spent years researching and searching for this lost temple. Now he thinks he has finally found the answers!

It also comes with a Mini-Comic with a surprise ending!

Looks like the Club has quite a bit in store for 12″ G.I.Joe collectors! Are you a fan of this year’s offerings? Sound off after the break!