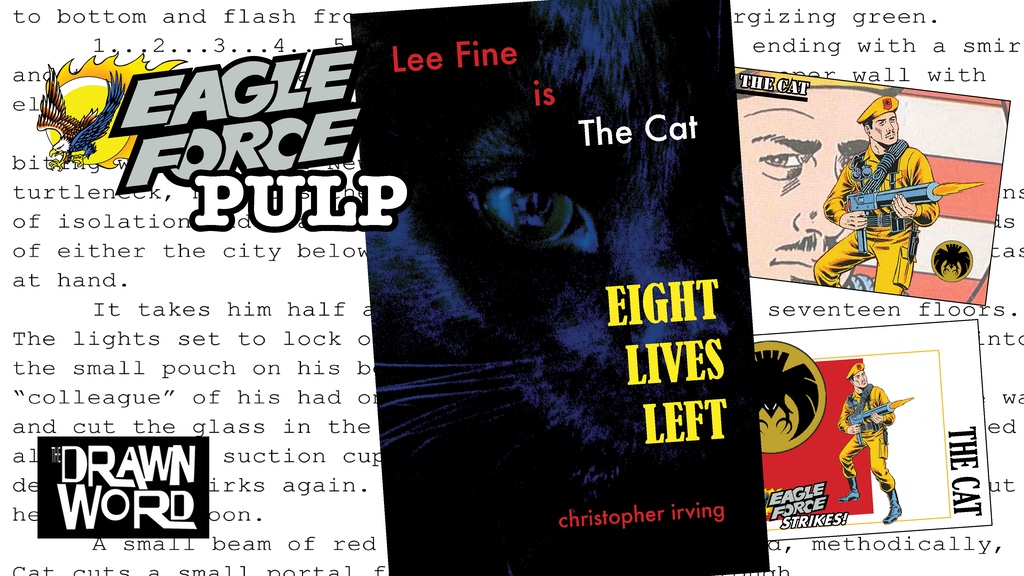 Where did Eagle Force’s battle against R.I.O.T. (Roving International Organization of Terror) really begin? It’s 1970s New York City, and The Cat is where it all starts.

The Cat: Eight Lives Left is the first Eagle Force Pulp novella that tells the story of Lee Fine, a cat burglar roped into taking on one big job for an agency so secret it doesn’t even have a name. Eight Lives Left plants narrative seeds that will come to bloom as far forward in the Eagle Force timeline as the upcoming Monster Force. It weighs in at as a 64-page pocket-sized (5.06 x 7.81 ) paperback book, with a limited print run for this first cover.

Written by Christopher Irving, right after the Eagle Force Strikes trading cards, this is an homage to all things Ian Fleming, as this cat burglar begins his journey into becoming America’s leading secret agent.

Reward levels include the book itself in a regular or signed and personalized edition, and also a limited metal card of The Cat–specially priced at just $5 with the signed edition. It goes for $10 as a post-campaign Add-On. If things get really ambitious and pass the $600 goal, Eight Lives Left gets an illustration by artist Tim Shinn when the campaign hits uts stretch goal of $800. Reaching $1,100 gets the stretch goal of a metallic foil Eagle Force trading card of The Cat, designed to go with the earlier Eagle Force Strikes! Goldie Hawk card.

You can get your pledge in here but make sure to do so quickly, as the campaign has only 13 days left to go: Eagle Force Pulp: The Cat in Eight Lives Left