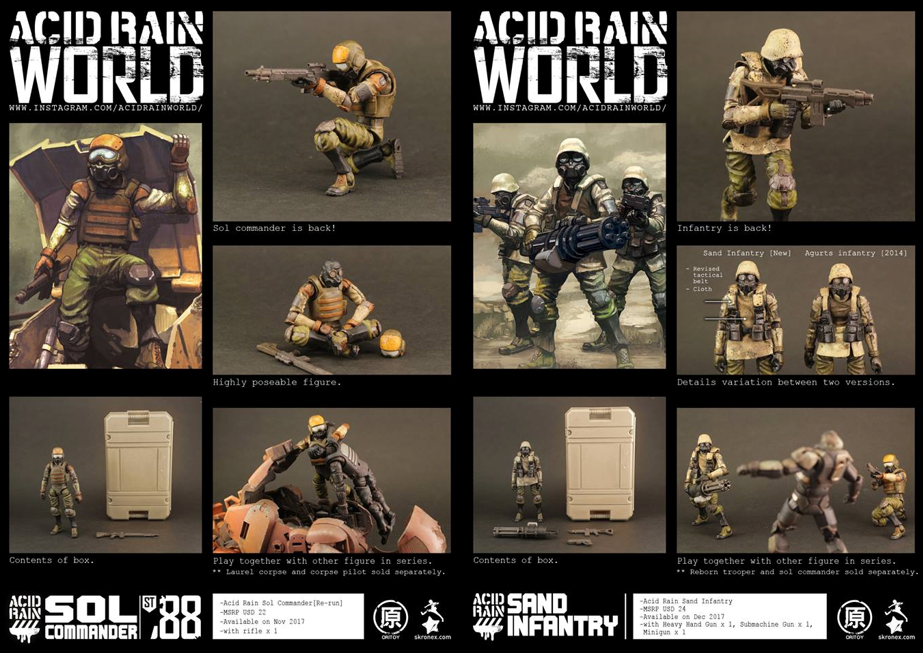 Great news for Acid Rain collectors! Our friend Kit Lau has shared word via the Ori Toy Facebook Page that the Sol Commander, the first trooper in the Acid Rain series, will be seeing a reissue! This time around, the Sol Commander will come in the newer style crate packaging as opposed to the original that came in a box with artwork on the front.

That’s not all! Another classic figure is coming back – You may remember the Agurts Infantry figure…well now feast your eyes on Sand Infantry! He features a new, revised technical harness and cloth goods!

Both have just been listed on HissTank.com site sponsor BigBadToyStore, with an expected arrival date of December 2017. Read on for full details on each release, then join us after the break for discussion already in progress!

First released in 2014, Acid Rain Sol Commander is back!

For a limited time you can now get your hands on this amazing figure which now comes with new box packaging! A rifle gun is also included.

Sols are armed with a long barrelled automatic rifles to ensuring they can keep enemy attacks at bay from distance. This gives the lightly armored pilots time to mobilize their vehicles while ensuring that the threat of close quarter explosive devices are kept to a minimum.

It is likely that Sol Commanders are adept at piloting but would also receive additional training in battlefield tactics, schematics of their vehicles, repair/engineering skills and communication abilities.

Very similar to the Agurts Infantry figure which was released in 2014, the new and improved Sand Infantry comes equip with heavy handgun, sub machine gun and a mini gun.

Just as Agurts Infantry, Sand infantry represents the general issue foot soldier in the regions of Agurts and Zamaii. They are heavily involved in the invasion from both Omangans and Soil Ghosts and are responsible for keeping any marauding forces at bay. Although some divisions are well armed, the troops have limited armor, their true strength comes in the form of their large numbers placing trust in decisions made by their superiors.