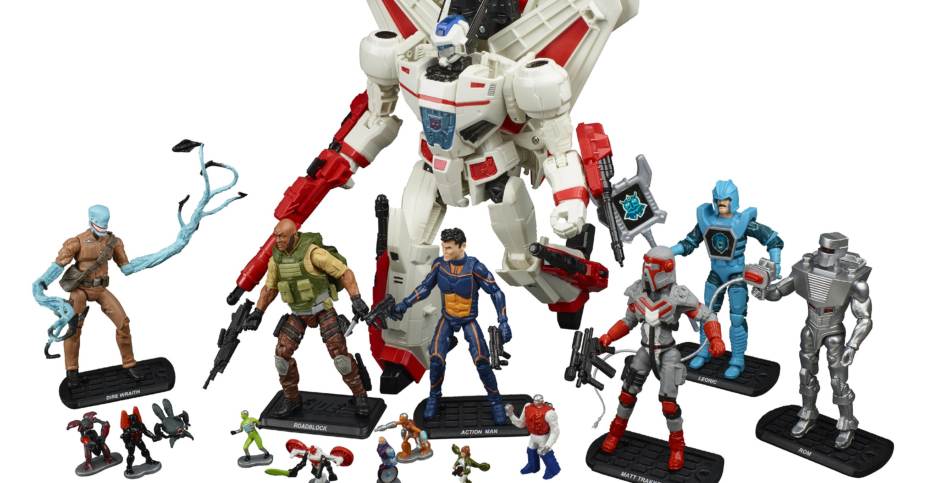 A massive new box set by Hasbro has been revealed by EW. This set, a San Diego Comic-Con 2017 Exclusive, features figures based on Transformers, G.I. Joe, Visionaries, Rom, Action Man, Micronauts and M.A.S.K. as part of the Hasbro and IDW Revolution expanded universe. The set includes:

Transformers – Jetfire
GI Joe – Roadblock
MASK – Matt Tracker
Action Man
Rom The Space Knight
Rom – Dire Wraith
Visionaries – Leoric
Micronauts – Assorted Minis
Here’s some additional info on the set. Thankfully, it will be available on HasbroToyShop.com, though in limited quantities. Read on for all of the photos.

It’s no secret that the toymaker Hasbro would like to assemble its different properties into one shared universe. Plans are underway to bring Transformers, G.I. Joe, Action Man, M.A.S.K., Micronauts, Visionaries, and Rom to the screen, but IDW Comics has already laid the groundwork by uniting most of them on the page with its Revolution series. Now Hasbro has created new toys based on their work.

This is the Revolution Comic Crossover Mega-Set, which will retail for $99.99. While it’s debuting at Comic-Con, it will also be for sale at Canada’s Fan Expo – and it will be available in limited supply at HasbroToyShop.com.