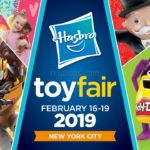 Mr. Goldner stated that the next G.I. Joe movie is planned for 2020.

He also revealed the newly updated movie logo. Exactly as we heard a couple of weeks ago, the company has reverted back to the original ARAH logo for the movie. You can check it out, after the jump.

However, the most surprising statement came next. Hasbro will NOT be funding for the upcoming movie. Mr. Goldner stated that they took this decision since the movie has already acquired the funding it needs.

“For next year, we are developing live action films: G.I. Joe and Micronauts. For 2021, we’re working on an animated CG 3D My Little Pony feature film and a live action Dungeons & Dragons film. Our funding model will vary between films. G.I. Joe already has funding and we will likely not contribute. For other live action projects, we may fund up to 50% of the production budget; recognizing more modest budget model that we’ve established with both Bumblebee and the 2017 My Little Pony animated feature.”

This move may also indirectly mean that Hasbro will only be minimally involved with the creative control of the movie.