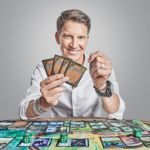 We were not disappointed as we heard good news from the company:

“We have a fantastic team [at Paramount Pictures] led by Jim Gianopulos. We’ve been excited and continue to be excited about executing on the priority projects we’ve identified. Transformers: Bumblebee was one. We have a film coming out next Fall from G.I. Joe, it’ll be Snake Eyes. It’s not directly analogous, but I kinda call it an opportunity to focus in on a character, an area of the business. The Arashikage who are kinda our ninjas. So, it’s a little bit like Bumblebee [movie] was for Transformers and this’ll be for G.I. Joe.”

In addition to the movie info, Hasbro confirmed that they are in talks with eOne for a G.I. Joe TV initiative (among other brands) but it will be considered for the 3rd Phase of the company’s plans with eOne (Phase 1: eOne’s existing portfolio, Phase 2: eOne’s partnership programs) and therefore no commitment was made at this time.

Hasbro is in active development with the G.I. Joe brand, and exciting times are ahead for the fans.