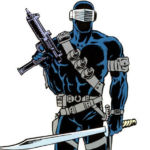 We’ve announced a while back that G.I. Joe will be featured as a Hasbro Heritage brand during the expo in question.

It just so happens that G.I. Joe was showcased at the booth with several random comic book pages. We’ve learned this info through 2005 Boards member Hawksford. However, we do not have any images at the moment.

Speaking to the gathered press, Hasbro Vice President Claire Gilchrist stated that the company has been been working on for some time to move from being a traditional toy company to a more nebulous ‘play and entertainment company‘. “The potential that the pending eOne acquisition brings to that goal is tremendous, and is a testament to our conviction to grow our vision. Just walk around the stand and see what we have on show. I’m confident you’ll agree”.

Despite the minuscule capacity, it is nice to know that there was some presence at all. For the past few year’s, G.I. Joe franchise was not seen or heard from Hasbro’s side. The company actively pitching ideas to potential license-holders is a good omen to the year to come.