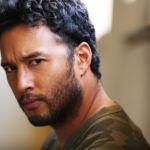 Allerick recently wrapped his a recurring guest star on Amazon’s The Expanse, which was right on the tail of his last role of Deputy Crawford on ABC’s new show The Fix. Additionally, Allerick has played roles on Jane the Virgin and Rosewood and recurred on Colony. Before that he was on Fear the Walking Dead, Speechless, and The Extant. Early on in his career, Allerick cut his teeth as the young lead in the Toronto stage version of the musical The Lion King. He is represented by Crimson Media, Aqua and Jamie Levitt (Canada).