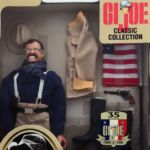 Though the company tried new initiatives in ’95 and ’96—like the 5-inch “G.I. Joe Extreme” line, which DePriest called “a disaster”—they were usually discontinued within a year. Joe was still a moneymaker, but it was clear that its popularity was sagging, especially now that it was under the same roof as the Star Wars juggernaut. Turns out, to evolve, the brand just needed to go back to its roots.

“The team at Hasbro was aware of the nostalgic interest in [12-inch G.I. Joes] beginning in the late ‘80s,” DePriest says. “They first tested the waters with a 12-inch product at the request of Target in 1991, with a version of Duke with sound effects marketed under the ‘Hall of Fame’ collection.”

“Teddy Roosevelt was a natural fit,” says Kurt Groen, the former designer behind the 12-inch line at Hasbro. “He’s bigger than life. So, that was an easy pick in the whole process.”

You can read the rest of the interview at Mental Floss.