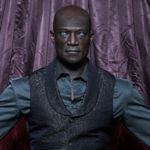 Henry Golding has posted a new image on Instagram, featuring the cast of Snake Eyes exploring the city of Himeji.

However, another new actor is seen, hiding behind Ms. Abe. The actor in question is Peter Mensah.

It is worth noting that Mr. Mensah is an accomplished martial artist who starred in many TV series including Spartacus, Agents of S.H.I.E.L.D.,  and movies such as 300, The Incredible Hulk and Avatar.

HISSTANK Boards Member skinny pointed out that Peter Mensah was seen traveling to Japan along with the rest of cast of the movie.

While we do not have any idea regarding the specific role he will play, it is likely that we are looking at The Blind Master; based on the leaked plot details back in December 2018.