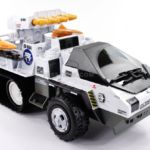 HISSTANK received the opportunity to visit the Jada booth at New York Toy Fair 2020, to take a look at their upcoming lineup of diecast G.I. Joe vehicles and metal figurines.

Larger vehicles were in single packs. So far it was the H.I.S.S. Tank and the V.A.M.P.

We may see more vehicles in the future. But a release date is unavailable at the moment.

In addition to the vehicles, Jada is offering a G.I. Joe line based on their Nano Metal Figurines brand. Duke and Snake Eyes were available from the Joe side with Cobra Commander (hooded), Storm Shadow, Destro and The Baroness available so far from the Cobra side. Characters were based on their ARAH counterparts.

While pack assortments were not specified at the time, these figurines usually come in single packs, 5-packs, all the way up to 20-packs and sometimes packed in with larger vehicles. Therefore, we are likely to see more characters down the line; especially considering the fact that only two Joe team members were present as samples.

Jada, as always, is maintaining their superb quality. This was evident by their vehicle line (figurines were unpainted prototypes). We wished to show the lineup to our members but alas, were hindered by a ‘No Photography’ rule.

Nevertheless, we were grateful for the opportunity and wish Jada, the best.

DESTRO reported from the frontlines. Over and out.