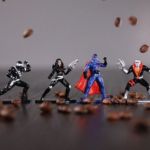 All six will be included in a 6-Pack.

Packaging artwork is based on the original ARAH art as is the styling of the figures.

While a release date is not mentioned, Jada is hoping to release the line alongside Snake Eyes: G.I. Joe Origins movie and capitalize on the popularity.