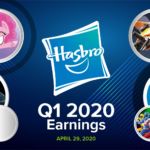 Hello and welcome to another TFW2005 Network Event Coverage. Hasbro held their 2020 1st Quarter Earnings Conference Call and made several remarks* regarding the future of the company.

You can check out all of the above and more, after the jump.

Note: * Remarks and release dates are subject to change

During the Q&A Session, Hasbro CEO Brian Goldner mentioned that they are working on new theatrical releases for Transformers. Though Snake Eyes: G.I. Joe Origins is listed on Hasbro’s presentation as unchanged for October 16th, 2020, Mr. Goldner stated the following:

“…We are going to produce great branded content for theaters. We are going to see new Transformers movies coming. We obviously have Snake Eyes movie coming over next year. We have My Little Pony to come.”

Hasbro also stated that they have 21 theatrical movies in the pipeline for various Hasbro properties.

Recently acquired entertainment giant eOne is working on entertainment content (TV series, animated content, movies etc.) for more than fifteen Hasbro properties. However, Mr. Goldner did not specify which properties the team is working on. It is likely that Transformers and G.I. Joe are included on the list.

Regarding toys and games production:

Products planned to release on Q3 and Q4 of 2020, will start their production in two weeks’ time.

Following additional notes were given to the press.

You can check out a couple of info-graphics, attached with this news post.