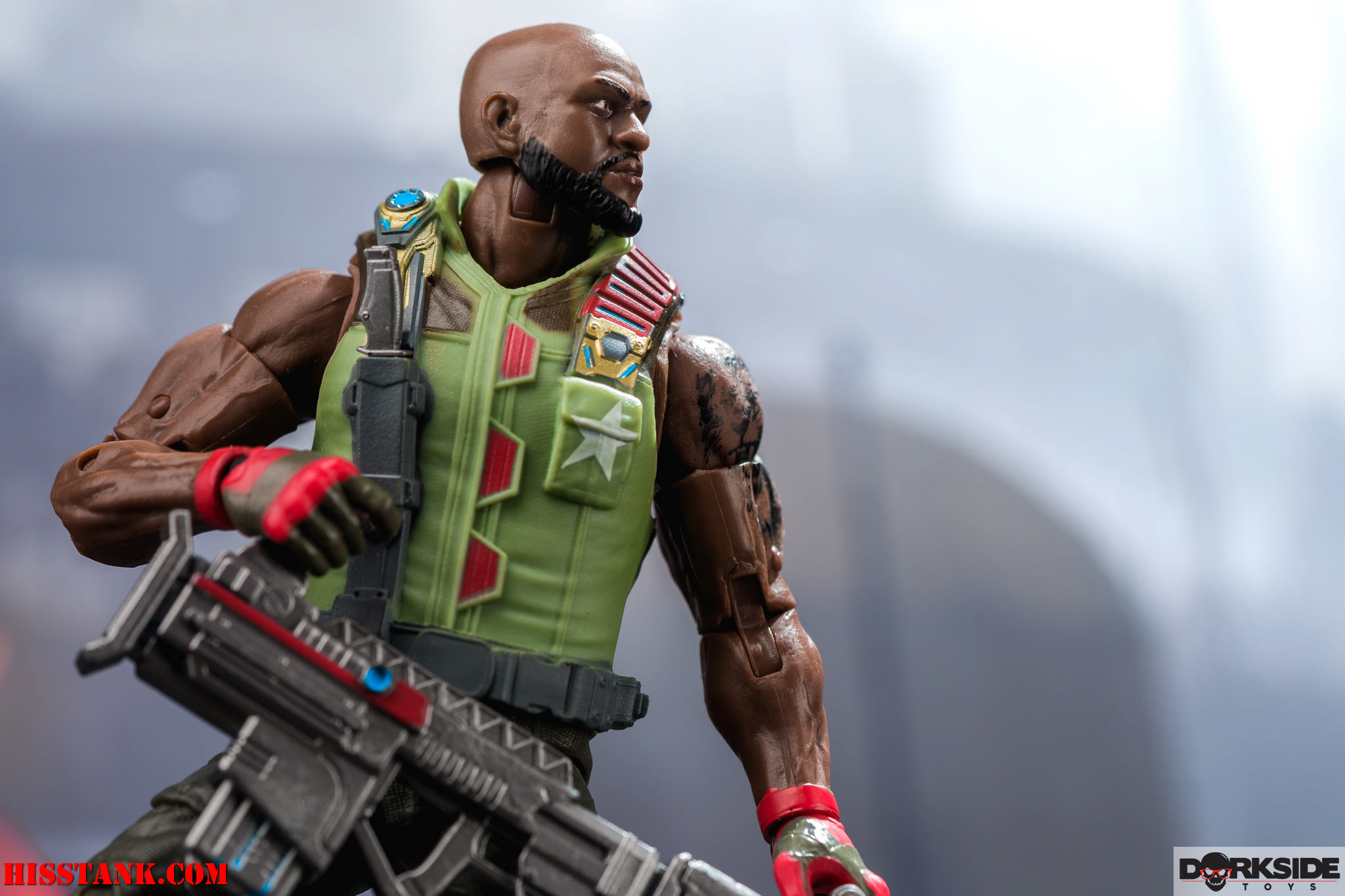 Yo Joe!  Next up in our looks at G.I. Joe Classified Wave 1 is #01 Roadblock.  He’s #01 in line, and features a mix of old cues and new elements throughout.  He ties with Scarlett for wave 1 figures with elements long time fans have concerns with.   Aside from a couple misfires in actual production, the core sculpt and figure is solid.  Read on to check out some additional thoughts on it all, along with 30+ shots courtesy of Dorkside Toys!

Roadblock takes cues from his v2 look, which was homaged in Modern Era’s “Urban Camo” deco.  Tech plating is present on one knee and his shins.  He has a digi print tattoo on his left shoulder as well.  Weapons include a large heavy laser rifle and a small knife which slides into his vest slot.  The vest is technically removable, but has no tabs or openings, so it will be difficult to do so.  Articulation is on par with the rest of the line, every conceivable cut, bend and swivel is there.  The vest limits torso bends though.

Overall, it’s a solid figure – from the waist down.  Something got lost in mass production up top.  The beard paint is a bit clunky, it looks painted on, relatively.  Like, in the toy universe, Roadblock actually painted his beard on.  A little more layering, detail would have gone far.  On my copy, there was misalignment and missing spots as well, so I had some molded beard waves without paint.  Then, there are the eyes.  Damn.   Even with the digi paint, they are still stark and look like a bootleg.  I don’t know what to suggest here technically speaking, but some refinement on the beard and eye paint for this guy is needed.  Sculpt wise – if you stripped all paint, it’s a sharp head.

We then get to the ongoing debate – to sci-fi or not sci-fi.  Roadblock always had a big ass gun.  He does here, but it’s VERY video game-ish.  An open end with blue clear energy parts forces you into that sci-fi side.  If you could ignore the shins and knee piece, this won’t let you.   I’m ok with everything on figure though I know I don’t speak for everyone.  The gun though, could use a step back towards reality.

Bottom line – due to head, least favorite of the bunch.  Toss a new head on there, get a less out-there gun, solid release.

Check out some key shots below, with the rest in gallery format after that! Check back tomorrow for more Classified Wave 1! 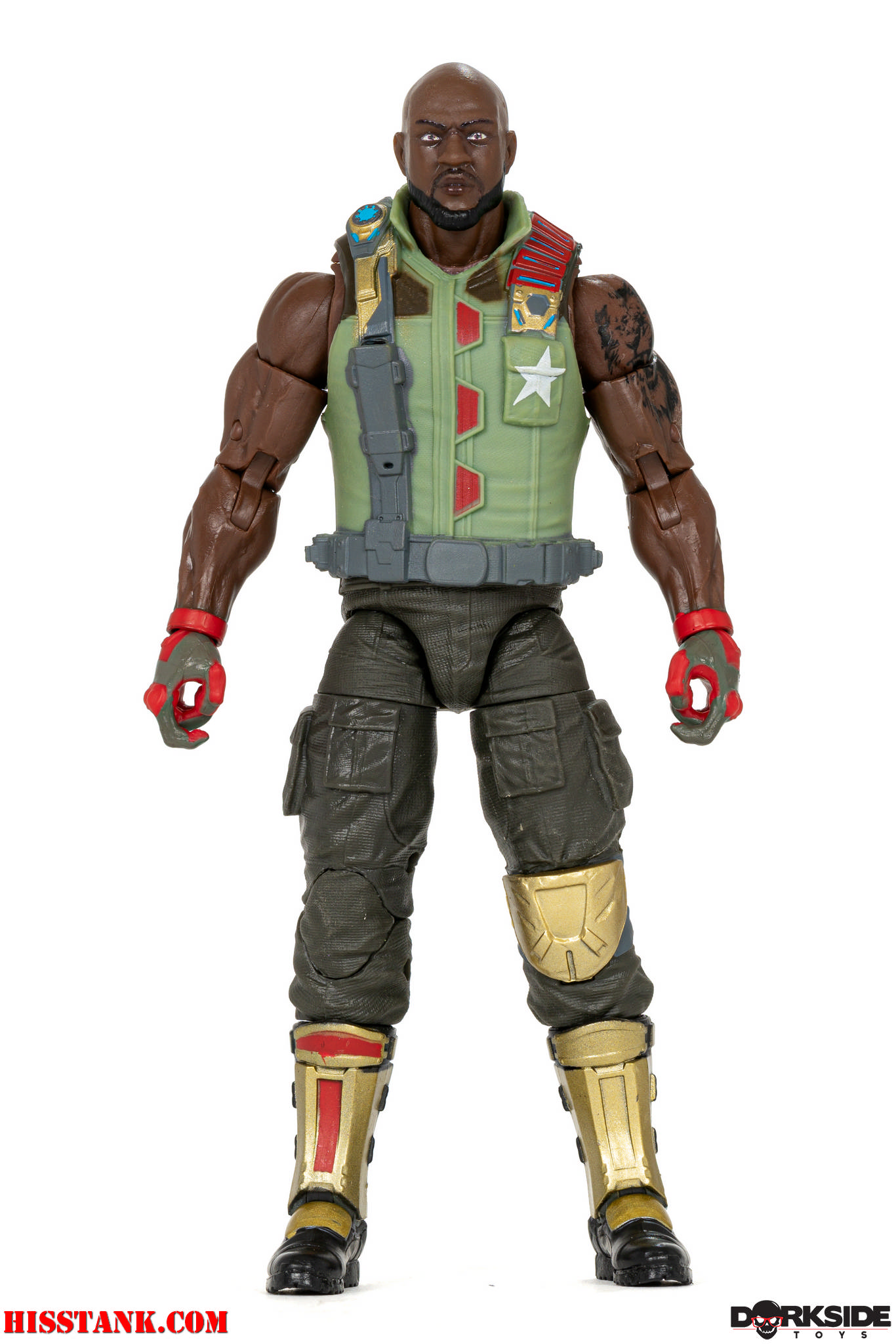 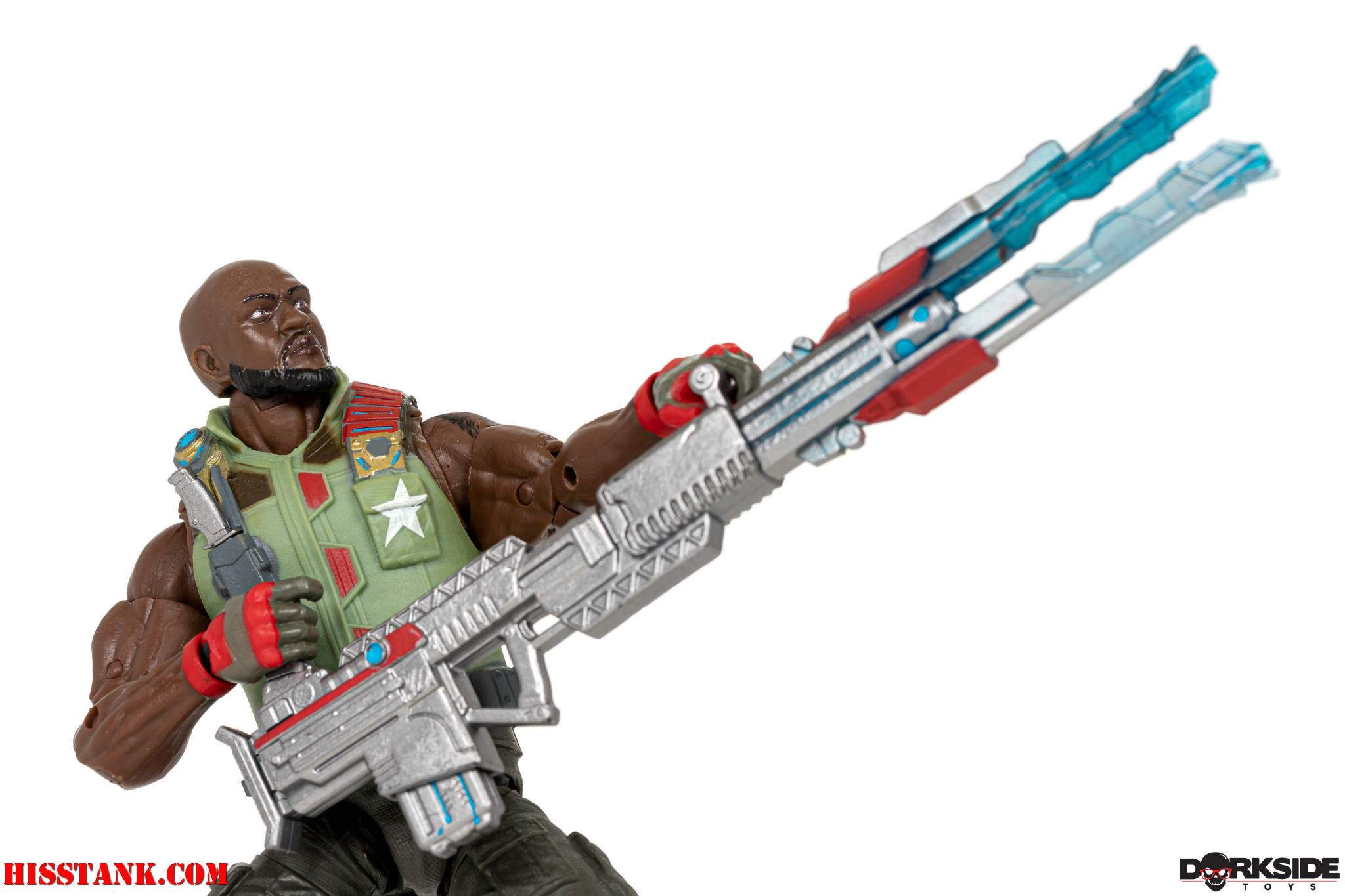 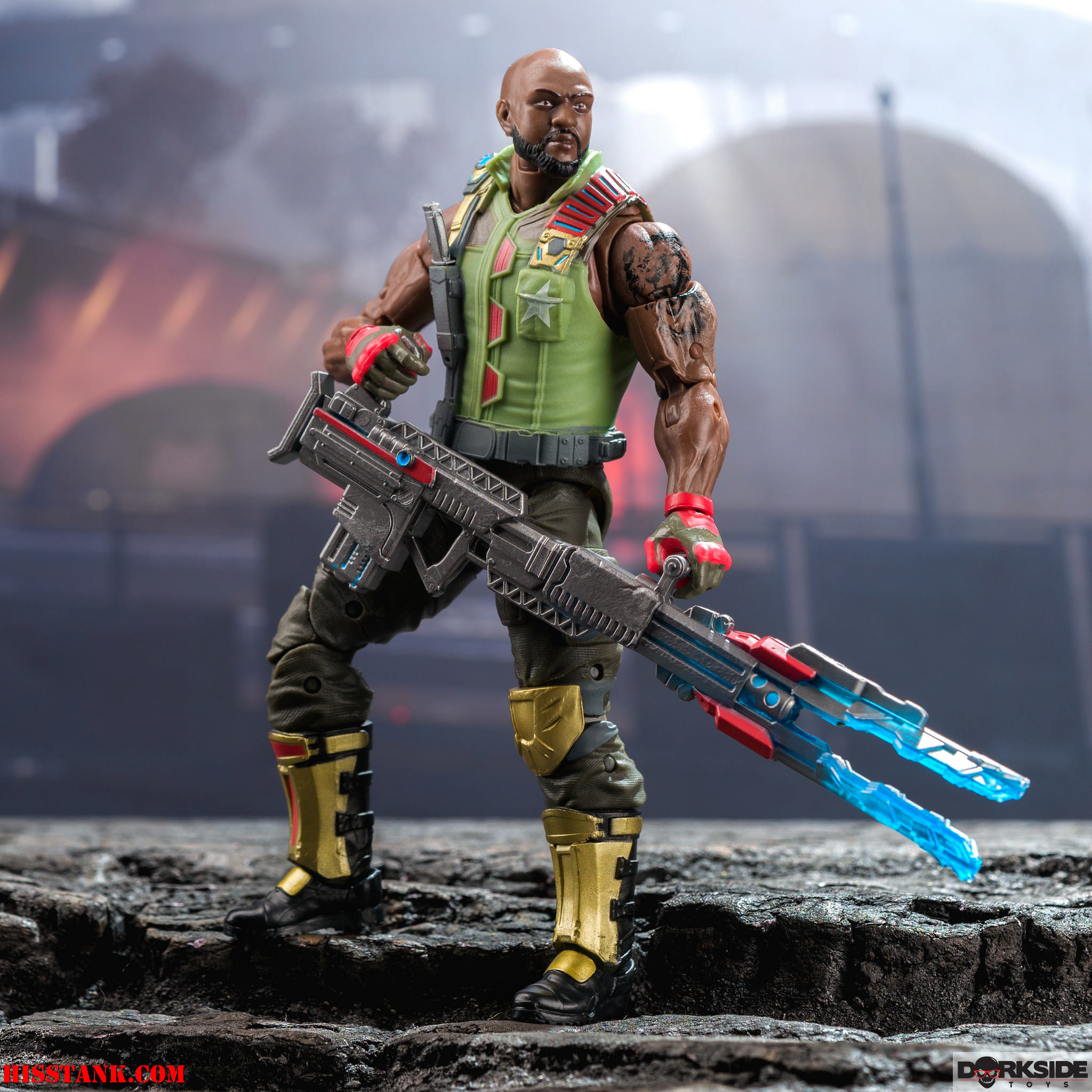 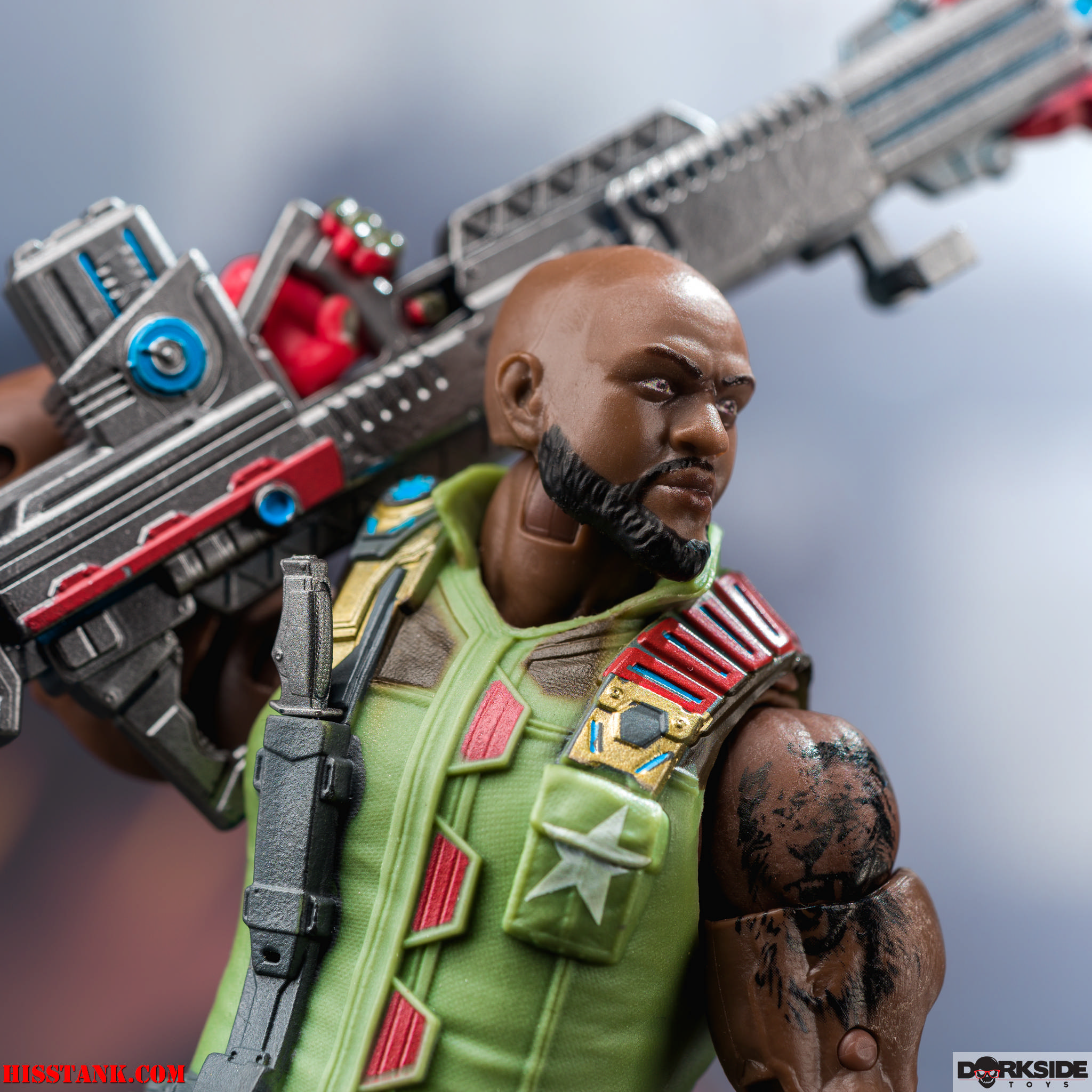 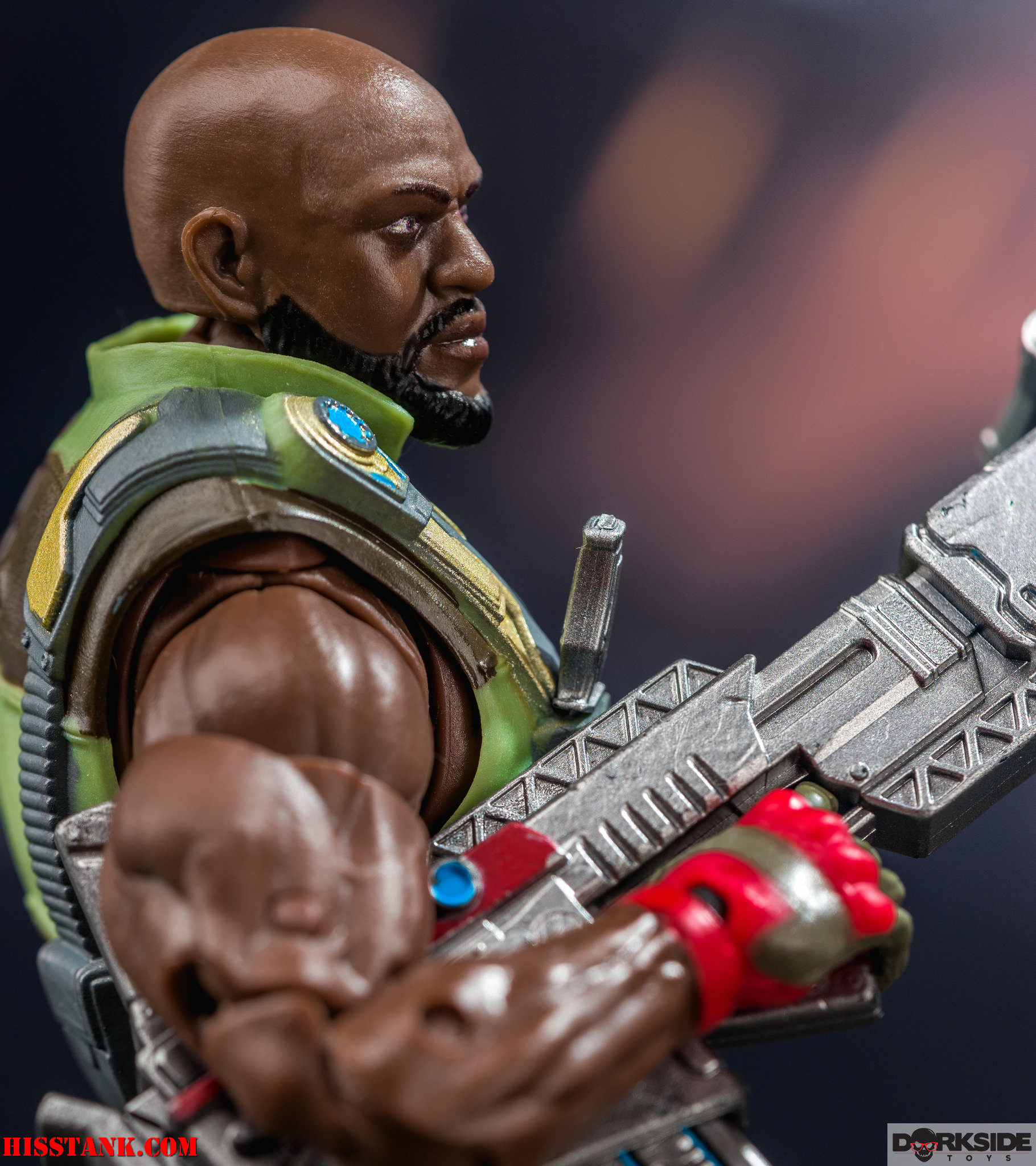