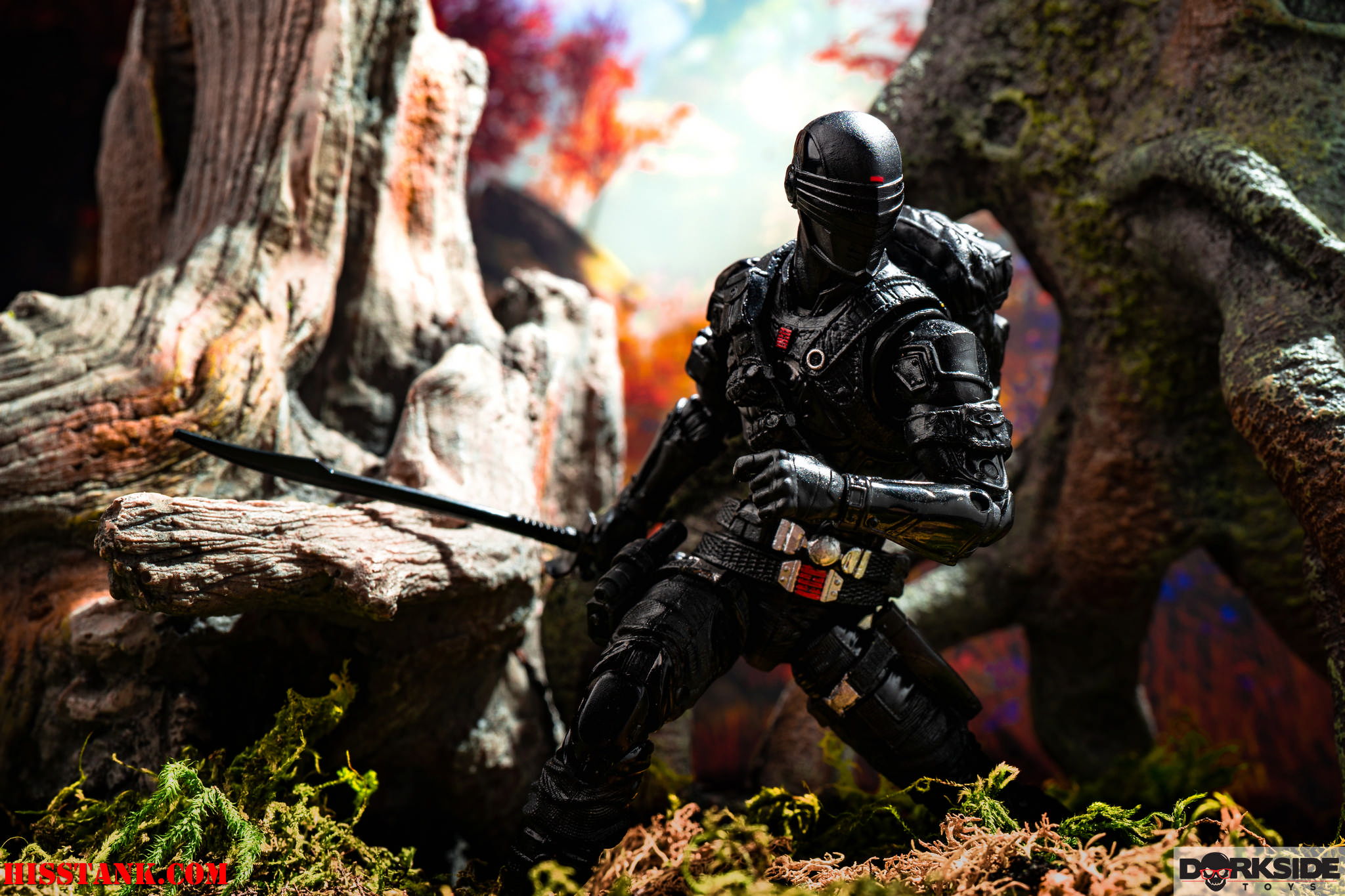 Wave 1 complete!  Today’s look at #02 Snake Eyes finishes up our galleries for Wave 1 of G.I. Joe Classified.  Snake Eyes is a repaint of the #00 launch figure, this time in all black, less weapons, and sci-fi pistols.  We’ve run him here and have over 40 HD images of him ready.   Read on to check them out, along with some thoughts on him and the line overall from myself and DESTRO, courtesy of Dorkside Toys!

And don’t forget to check out our galleries for the other figures: #00 Snake Eyes, Roadblock, Destro, Duke, Scarlett

Not much to say about this guy that we didn’t cover in the #00 release in March.  It’s a really good figure, and the one gripe some had with him not being all black – addressed.  Everything works, black on black on black is great.  That red block above his visor is distracting though, I keep seeing it as a rogue paint splash every time.   The sci-fi gun – cool for what it is but I think a sci-fi uzi, or one closer to that silhouette would have been more boss.  Bottom line – a great figure in a good color scheme and welcome wave one addition to the shelves.

G.I. Joe Classified has been a long time coming for me as a fan and collector of the 6″ figure scale. It was only a matter of time that Hasbro released these G.I. Joe 6″ designs that they have been sitting on for years. At the start of Toy Fair 2020 things were looking perfect for the relaunch of G.I. Joe. We had the Snake Eyes movie finishing up filming and the Classified launch had just been spoiled. Since then things have been delayed, marketing plans have been shattered, release dates destroyed and yet in spite of all of the real world issues all of us are facing both G.I. Joe Classified and the Retro Line are complete sell outs.

I think in the past we took for granted the amount of G.I. Joe product we have received both at movie time and the overall 25th Anniversary explosion. We also gave Hasbro a ton of grief over figures and sets that now sell for ridiculous prices. We are heading into another G.I. Joe Movie boom and I think fans of all kinds will find something to enjoy as the movie line is shown and the classic offerings expand.

G.I. Joe Classified as a line has just begun to hit its stride and the mix between new and old IMO was executed just about as good as can be expected given the circumstances. I like the fact they are pulling from the past in Ninja Force Storm Shadow and hit it out of the park with the Classic Destro. Not to mention that awesome Pulse Exclusive Snake Supreme Cobra Commander and PDD Destro sets. This line has teeth and I’m hooked. Bring on the 6″ vehicles, H.I.S.S. Tank, Trouble Bubble and how about a Cobra Throne. Who knows we may even get our own HasLab project if we make enough noise!

HissTank Admin: Tony_Bacala
Yep!  So, over the last 5-7 years, I was tricked out of collecting 3.75 inch scale figures as my primary non-Transformer scale and into 6 inch.  Marvel Legends, Black Series, MOTUC, DCUC, DC Collectibles, and then all the Asian imports like SH Figuarts and Mafex just made it almost impossible if you wanted anything.  Boss Fight and some others kept the scale alive best they could, but with no Joe on the regular, and no other brands doing anything close to Modern Era before, during or after it’s run, it was time.  I’m glad I did, because there have been great figures at the 6 and 7 inch scale over the last 10 years.   It’s a perfect balance for collector level figures.  Still affordable, able to get some realism, but not 1/6th Hot Toys prices.  And ever since I was on the new path, I’ve wanted G.I. Joe in this scale.  Now we do.

As for Wave 1 specifically – overall I am happy.  I’m less concerned with the sci-fi angle than some are.  I get the points though, I really could take it either way.  If what they are doing helps draw in new collectors, kids, then go for it.  But the ones that really scratched the itch this round are ones that are closer to vintage on a quick glance.  Duke, Snake Eyes, Destro.  Gung Ho is solid.  Cobra Commander is solid too, I prefer him with some slight battle armor vibes rarther than the OG tight suit, even in the 3.75 days Resolute was my preferred look.  I’d like if the style of the sculpt/paint on the heads were a bit more uniform – Roadblock Scarlett and Duke are all different in style/tone.  Shoot for the Duke method IMO.  The articulation is great, pretty much every cut and swivel is there. Only thing I could want is a bit more control over the abs, you go from standing up to hunching all the way over in one click.  A ball joint like modern Marvel Legends or the Scarlett could be a good upgrade down the road.

Check out our shots for Snake Eyes below.  And hit our previous galleries here: #00 Snake Eyes, Roadblock, Destro, Duke, Scarlett 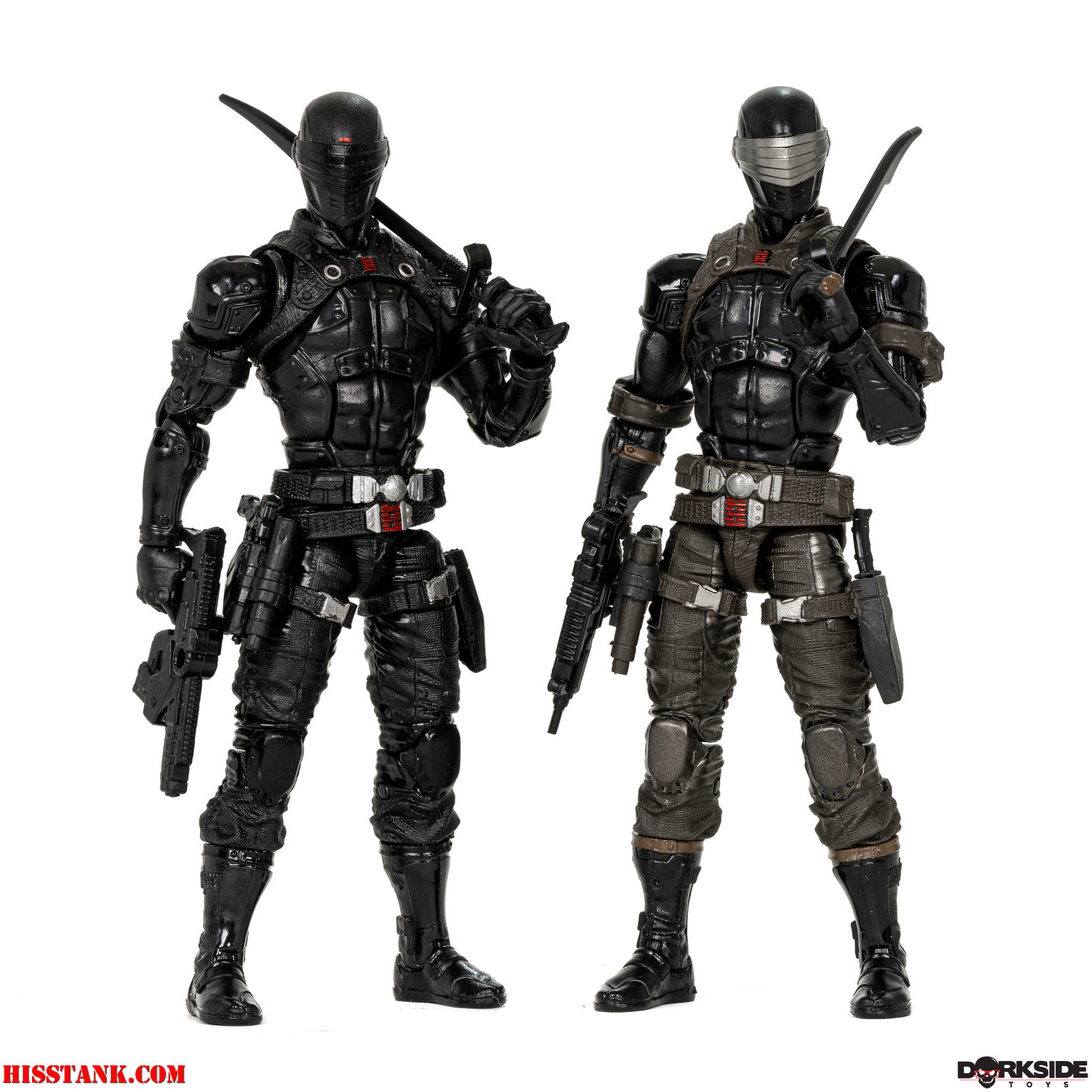 Yes, he likes wearing his armband down by his elbow. 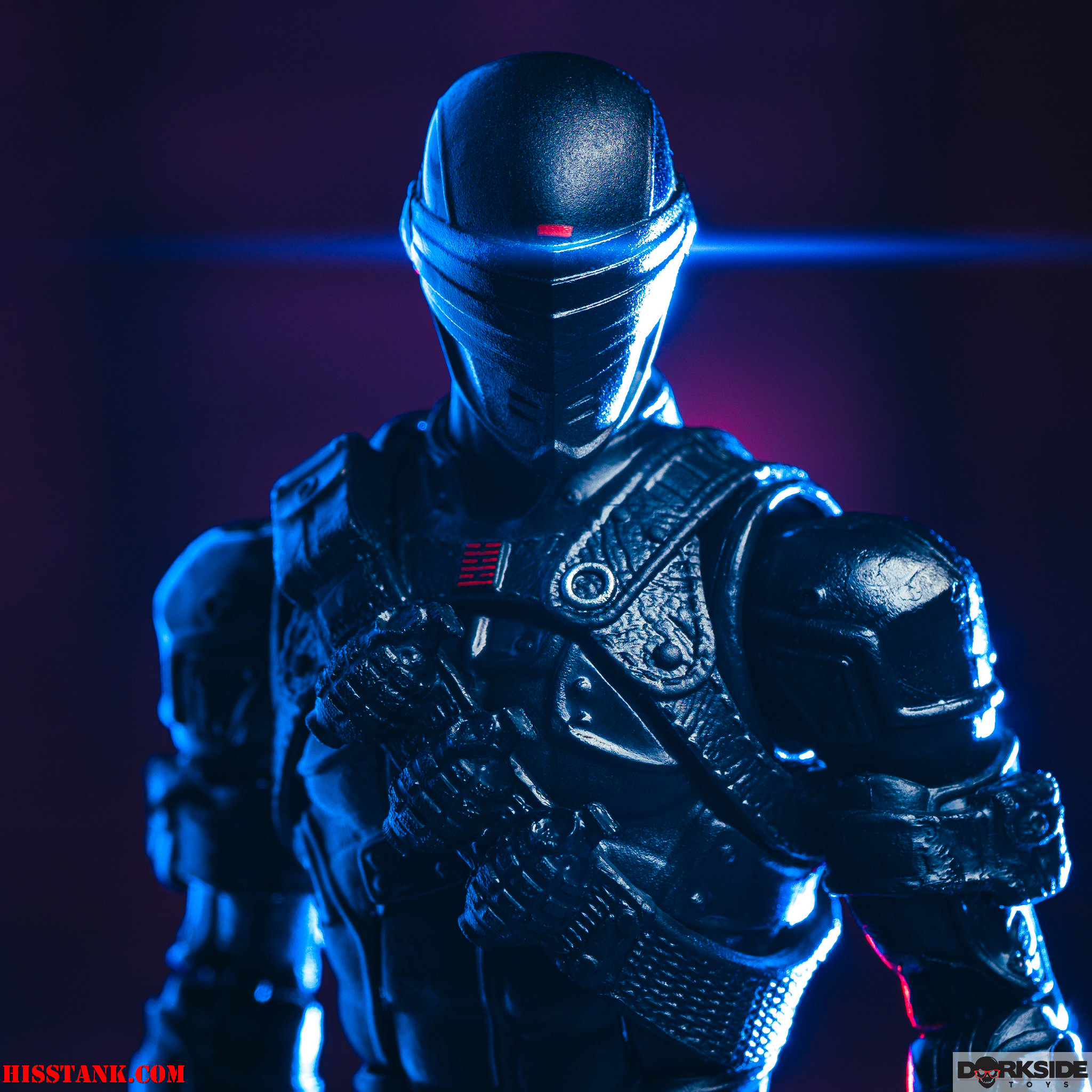 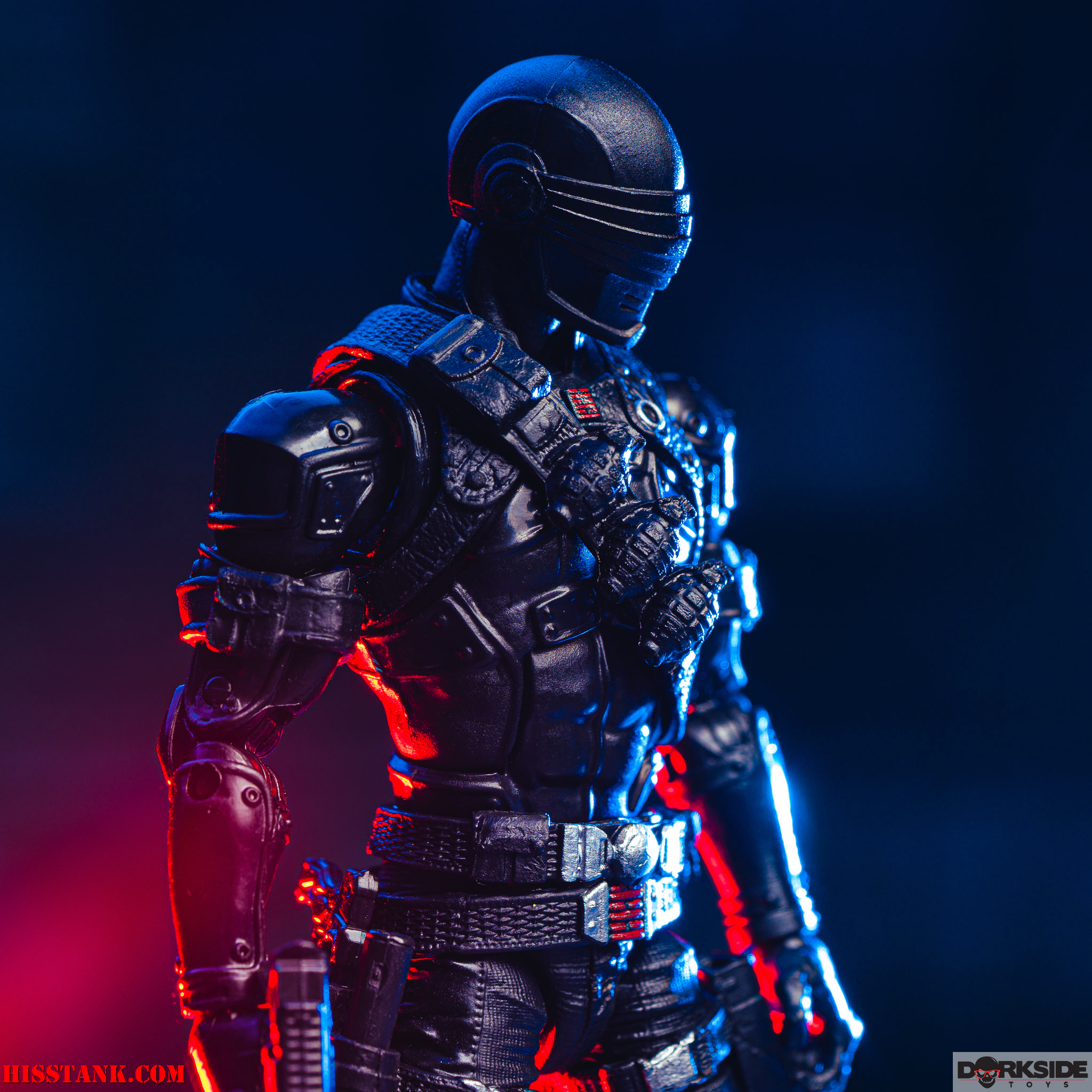 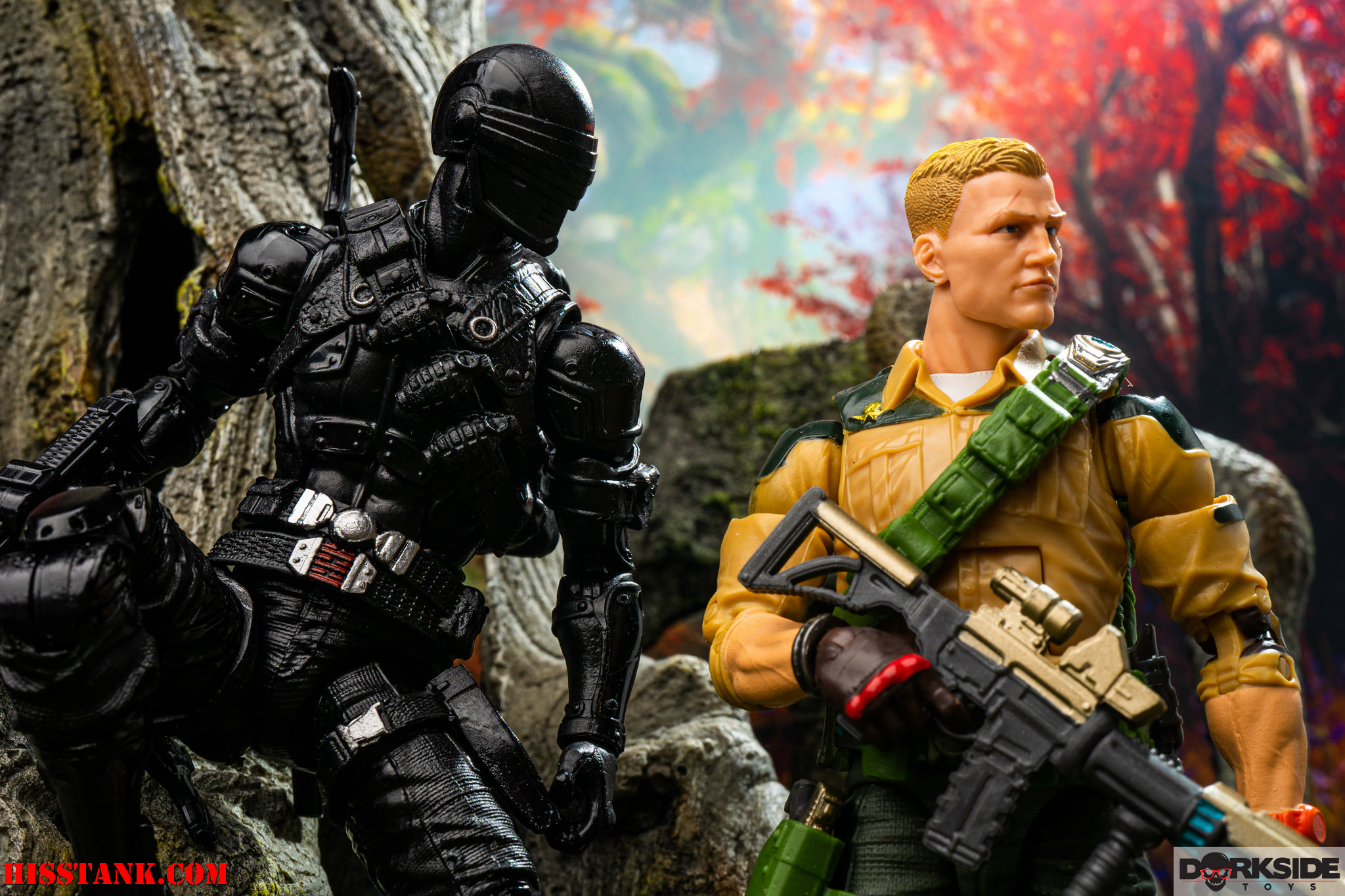 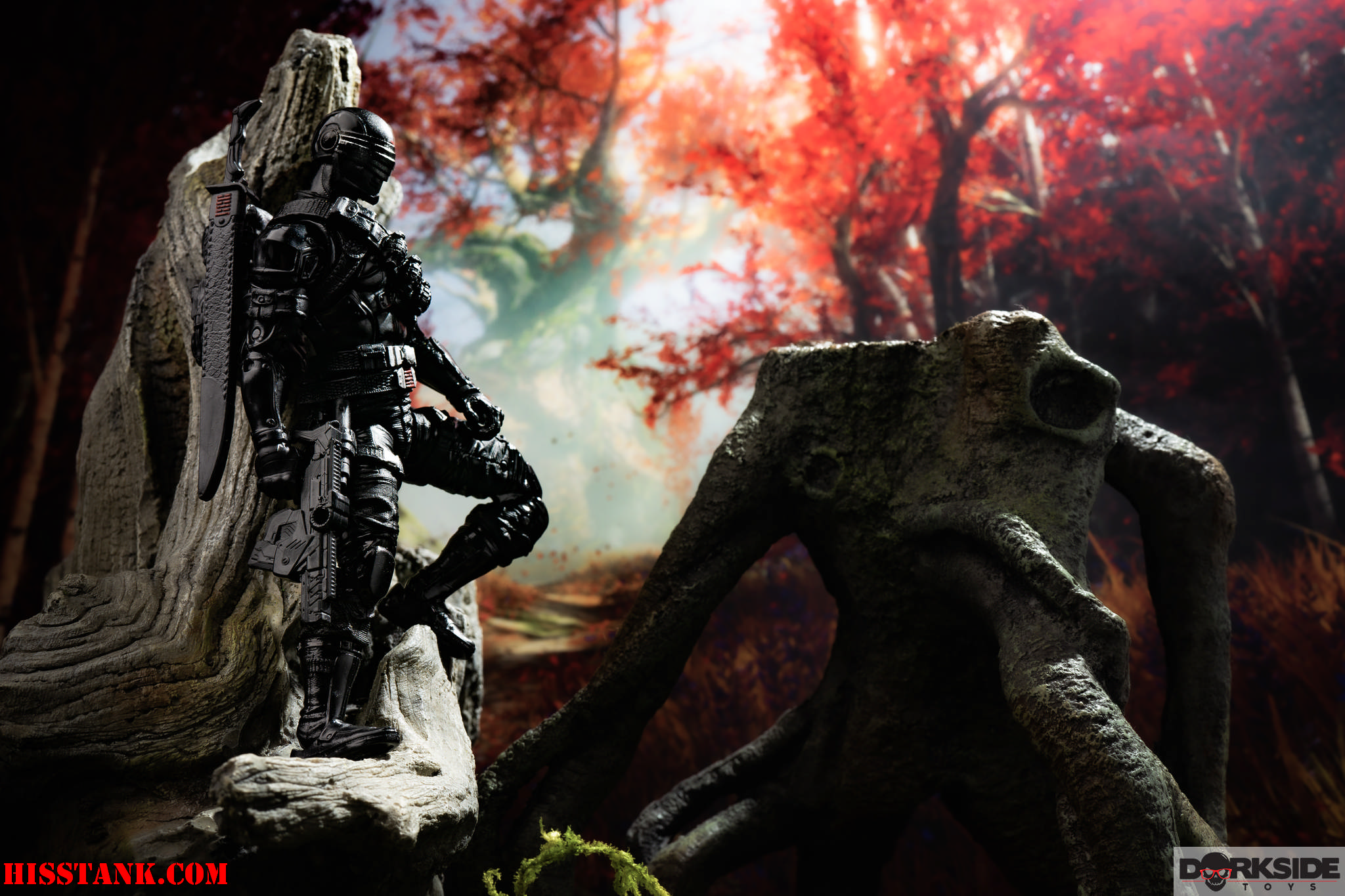 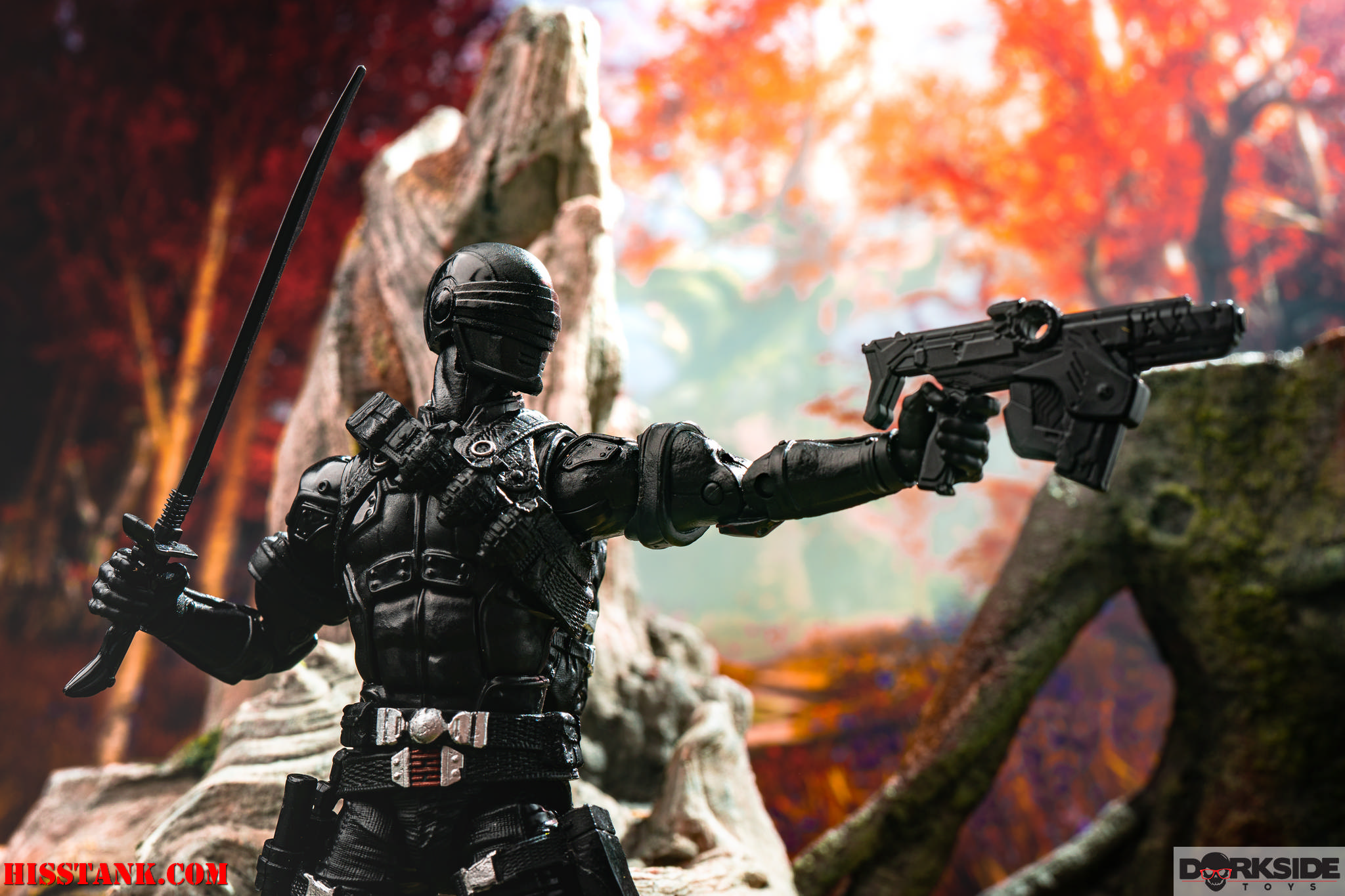