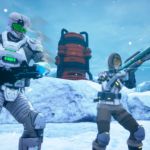 IGN has shared with the fans, our first trailer for the upcoming video game G.I. Joe: Operation Blackout.

“The campaign will be an original story based on 80s comics, taking you to Cobra Headquarters and the U.S.S. Flagg. Multiplayer will include Capture the Flag, Assault and King of the Hill modes.

The game seems to be taking something of a hero shooter template, with characters each coming with unique powers, but customisable weapons and looks. Confirmed playable characters include Duke, Snake Eyes, Cobra Commander, Destro, Roadblock, and Storm Shadow.”