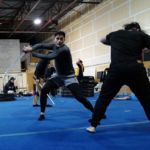 Speaking to Entertainment Weekly, Mr. Golding elaborated on his statement regarding the early test screening of the movie; which took place inside a 300-seat screening room in Los Angeles.

“We had our own corners of the cinema because you need to go through the processes. You need to see it and test it and get a reaction and notes from everybody.”

“I think the heart of the story really is who Snake is and his journey as a person, really. Understanding his motivations. I can’t give away too much, but it really focuses on the one person instead of having 20 people on screen and understanding background. We start from the beginning. And, hopefully, this launches an amazing franchise.”

He also talked about the Japanese influence towards the movie.

“Robert is a huge Japanese cinephile, everything from [Akira] Kurosawa to just the phenomenal Spaghetti Westerns of samurai movies. He is so hooked into that history and we see some of those scenes. With some of the fight scenes there are some chimbara sequences (Japanese sword-fighting). A lot of attention to cultural detail was put into this movie. There are not a lot of movies that are allowed to film in Japan and we went to some amazing, amazing places. The authenticity is there.”

Henry Golding stated that Paramount was cooperative with the opinions of the cast and crew.

“All the producers at Paramount really listened to my opinion, the opinion of others, and I think that’s why it’s going to be so special. It’s definitely been a challenge in creating something fresh and new, but I think we definitely achieved it.”

You can check out the interview with Anthem Magazine, after the jump.

Now you’re going to headline Snake Eyes, which I know you wrapped on before COVID hit.

“Yeah! Obviously a lot of productions were put on pause or delayed. Releases were pushed back. We’re coming out next October. It was meant to be out now, essentially.”

That must feel weird, right?

“It’s a weird, weird concept. This year has gone past so fast.”

Just quickly going back to Snake Eyes, I spoke to your director when The Captain came out.

“Oh wow. I gotta say, that’s one of my favorite films I’ve seen. It was weird because I hadn’t heard of it. They were like, “This is the film by Robert [Schwentke], the director they’re hiring for Snake Eyes.” I was like, “Awesome! Now I gotta watch it.” Then I was like, “Woah!””

Robert has one of the most diverse filmographies I’ve seen from a director so I asked him how he has managed to do that. He basically said that you have to say no to things a lot. This is the same guy who turned down the chance to direct the Game of Thrones pilot. Do you see some truth in what he says?

“Yeah, I think it’s very true. A lot of people say that you’re only as good as your last film here, which I don’t quite believe. But I think there’s truth in what he says, for sure. Especially in a sort of fledgling career like mine, it’s really important to get the range in characters and the stories. We went from romcom with Crazy Rich to a kind of thriller/dark comedy with A Simple Favor. I filmed Monsoon, which is very much dramatic, and then I did Last Christmas, which went back into the romcom realm. The Gentlemen with Guy [Ritchie] is your gangster film. Then we’ve got Snake Eyes. To have that spectrum has been wonderful and it has in some ways steered my decision-making in terms of what I want to do next. I think it really is about finding the right filmmakers with the right material. With another romcom, if I love the filmmaker and I’m in love with the script, of course I’d do it. It’s about making the films where you don’t mind spending five months of your life on, essentially. The decision to spend the time, months and months away from your friends and family—that’s your sacrifice. So what are you doing it for? Are you doing it for the paycheck or are you doing it to be able to come out of it like, “Man, I loved making the movie. This was a pleasure to be a part of. I can’t wait to have it in my collection and stan”?”