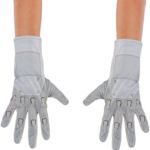 Once again thanks to Pure Costumes, we have another set of Snake Eyes: G.I. Joe Origins role play products by Disguise Inc.; an official license-holder for the movie.

Gloves however is a brand new design. This could very well be our first look at an actual part of Storm Shadow’s costume from the upcoming movie. Storm Shadow’s design for Rise Of Cobra and Retaliation had fingerless gloves whereas this new design is a full pair of gloves covering the fingers. Disguise has now produced non-repainted, movie identical gloves for all three movies for Storm Shadow. Interestingly, the design shares some similarities with the Classified Series look, albeit being white/grey in color instead of black as seen on Classified Series artwork.

“Grab a sword and transform into Storm Shadow. If you loved the prequel Snake Eyes movie, you’ll love becoming this awesome fighting character. You’ll look like a real life ninja!”

“Complete your Storm Shadow costume with the help of these gloves. You can make sure your costume looks great from head to toe! With a complete costume, everyone will be impressed!”

You can checkout the images, after the jump.