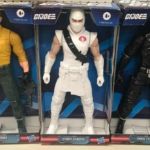 Thanks to Facebook group ‘Living the Adventure Dios‘, we now have our first look at G.I. Joe Classified Series Titan Class Figures.

These Titan figures (“lovingly” called as Shampoo Bottle Figures) comes with 5-points of articulation and 4 paint applications. Primary market for these figures include low-income as well as pre-school.

Speaking of which, the Titan figures were spotted at retail for $9.99 each.

On an interesting note, this is our first look at Storm Shadow in his base Classified Aesthetic.