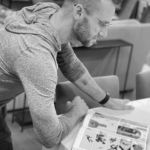 The photo shows Donald Mustard reading Silent Interlude. Adding to that, he has purposely rolled up his left sleeve to reveal an Arashikage tattoo; as seen on Snake Eyes and Storm Shadow.

Recently, the famous battle royale game is revealing quite a lot of collaborations including Marvel, Halo, God Of War, The Terminator Franchise and The Predator.

It is likely that we would see an official announcement soon.

Update: Teasing the fans even more, Donald Mustard has set a new location for his Twitter Profile. His location now reads as ‘Arashikage Clan’.