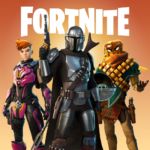 The next update for Fortnite is about to be deployed and details are already coming in regarding its content.

The patch seems to contain a locked Set titled as ‘Arashikage Clan‘. A ‘Set’ on Fortnite is a bundle of character skins and equipment belonging to a particular theme.

The Katana can be utilized as a Backbling; which is an accessory carried on the player character’s back. It can also be equipped as a weapon. In this case, the Katana will fall under the Pickaxe Category of the game. This category usually hosts melee weapons.

The name given to the Set is an interesting one. Instead of using the name ‘Snake Eyes Set’, as used by Kratos and Master Chief, the use of ‘Arashikage Clan’ may indicate a possible future addition to the set. It is likely that Storm Shadow may join his fellow clan member just like T-800 and Sarah Connor; whose set is called ‘Future War Set’ instead of using their individual names.

The new update is rumored to hit tonight.