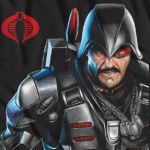 After a quite a long drought, HISSTANK Boards member Jtprime17 is brining in some info rain to quench our thirst.

A brand new G.I. Joe Classified Series listing has been found under a code name titled Asteroid. Once again, shipping information site Panjiva is revealing the new figure. What’s interesting is that the toy is already shipped to United States.

History has a way of repeating itself: Just few days before Toy Fair 2020, Snake Eyes 00 was discovered on a Bill Of Lading at this very shipping site. This new figure has been discovered within mere days to the upcoming Hasbro Fan Fest. Additionally, the figure seems to be shipping as solid cases; further assuring that this is a Convention Exclusive.

The toy is listed under Hasbro Code ID: F2790

Update: Information we received states that the figure in question is none other than Cobra Island Major Bludd.