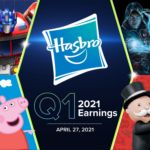 Hasbro held their 2021 First Quarter Financial Results Conference Call a few hours ago and presented the results to their investors.

“Transformers revenue growth was led by gains in the U.S. and Asia Pacific, and global point of sale was up nearly 40%. Innovation and storytelling are central to driving Transformers and the eOne team is expanding the reach and relevance of the brand through world-class entertainment across platforms and demographics. We delivered our latest War For Cybertron content in partnership with Netflix on December 30 supported by new products that drove the first quarter’s performance. War for Cybertron Chapter 3 will be airing this summer and, in partnership with Paramount, the next feature in the theatrical Transformers franchise is slated for 2022.”

“Transformers continued to be the top brand performer on Hasbro Pulse in the first quarter delivering the much anticipated HasLab Unicron. The brand kept the momentum to start Q2. In partnership with Robosen, during Hasbro Pulse Fan Fest earlier this month, we unveiled a $700 Auto-Converting Optimus Prime Robot, which sold out in pre-sale in less than 10 hours.”

“With our partners at Paramount, the G.I. Joe Snake Eyes movie release is now set for July 23 and the brand team continues to drive engagement and demand with fans through product and events including our Pulse initiatives.”

During the Q&A Session, the toy giant elaborated on its entertainment plans.

“We continue to look at how we put our Hasbro IPs in the market. There’s a very strong demand for world-class IPs and Hasbro has an array of it. [As I mentioned] we are working on a number of brands and we’re starting to see the traction around brands like My Little Pony which we talked about is on Netflix in September, Transformers: a new TV series going on air in other platforms and our film, coming next year in partnership with Paramount, and then Power Rangers: you’ll hear more about it, but we’ve been developing and we expect shortly to be able to talk about, a brand new content for [Power Rangers] that will go after a multitude of audiences which will be on a streaming platform.”

“A couple of new films, G.I. Joe and My Little Pony. We are lining up our inventories for those major initiatives.”

You can check out the presentation slideshow, after the jump.