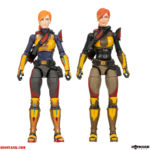 Classified Series Duke, Scarlett, and Roadblock who received repaints a while back have now received their very own UPC Codes and Hasbro Codes to distinguish themselves from the originals.

Walmart has been updated recently with this new change. Several retailers also reported this info to us. The figures in question previously shared UPCs and Hasbro Codes with the originals, leading to confusion about what will be received when ordering the said figures.

In addition to the codes, the three figures are now officially named as ‘Field Variants‘.