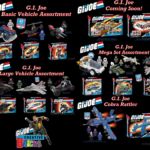 A little over a week ago, we received a surprise from Tuesday Morning outlets nationwide. Previously unannounced G.I. Joe construction sets started popping up and caught the attention of G.I. Joe fans with little to no info behind this officially licensed line.

Since then, Forever Clever, the manufacturing company behind the line, has updated its official website with the reveal of G.I. Joe: Creative Bricks.

In addition to the already available (and spotted) toys, future releases are also revealed today.

You can check out the images (upscaled from low resolution), after the jump.