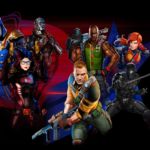 During a sizzle reel, a brief clip from the show was shown to the audience. You can check out our description of the clip, after the jump.

The clip was animated like what we usually see on a typical flashback scene. Moving characters to a static background akin to Mortal Kombat X Endings. Could just be placeholder concept art. Barely 2 seconds.

Snake Eyes and Storm Shadow are fighting a couple of enemies. Both their designs are brand new and futuristic.