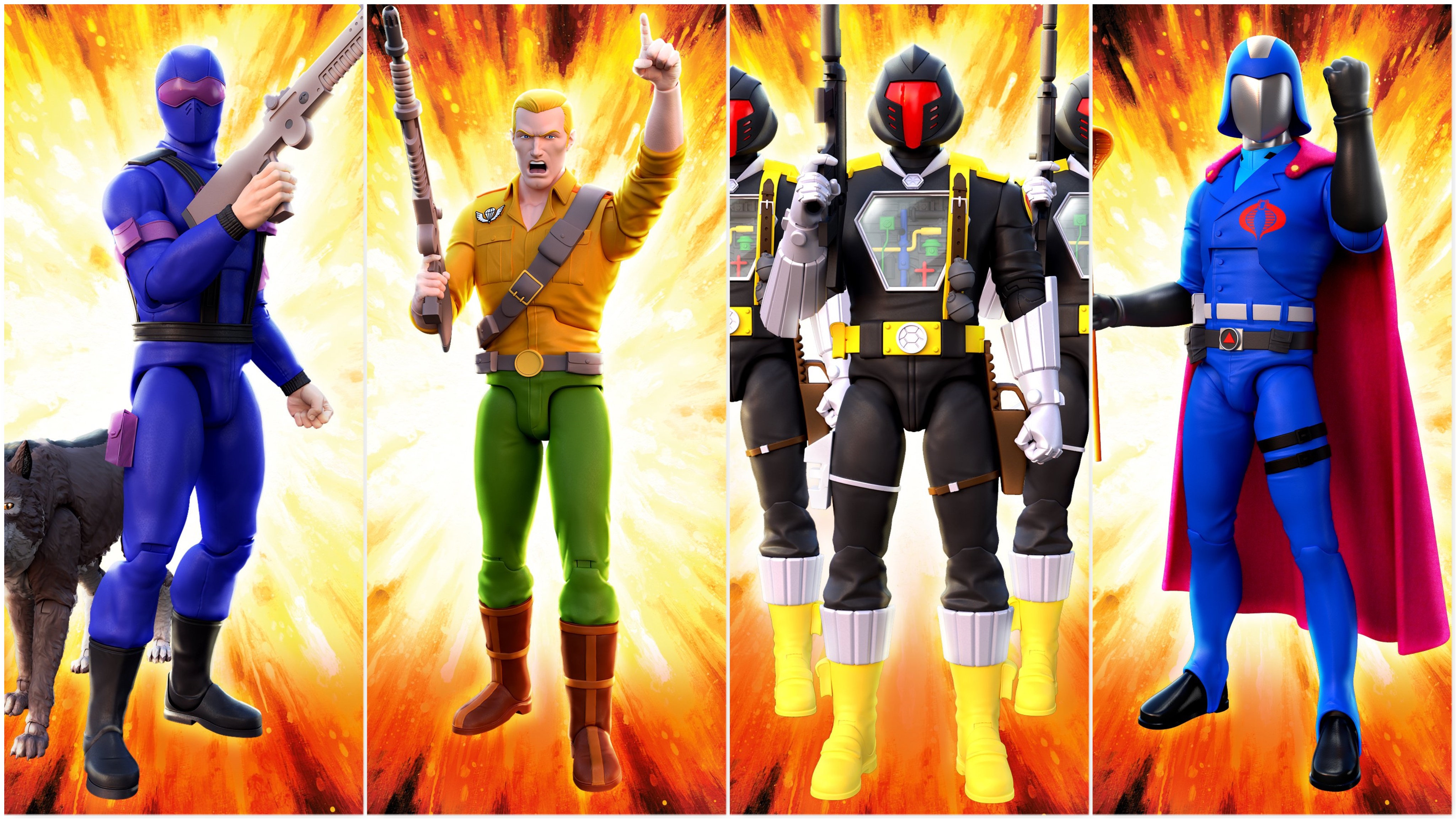 Super 7 have finally revealed their G.I. Joe Ultimates wave of figures.  These stand at 7 inches tall and are heavily inspired by the Sunbow cartoon.  The first wave consists of Cobra Commander, Duke, Snake Eyes and Timber, and the Cobra B.A.T.  Retail is around $55 USD, pre-orders will be open for 1 month, and they are printed to order.  They will ship in Spring 2022.  Read on for details and pics!

Update – shots from their promotional video are now included, and the video is after the break!

***[CLASSIFIED]*** Snake Eyes may not be able to speak, but his G.I. Joe ULTIMATES! figure pretty much speaks for itself! Based on his appearance at the beginning of A Real American Hero, this made-to-order 7-inch scale fully articulated Snake Eyes ULTIMATES! figure comes with interchangeable hands and a variety of accessories, including multiple weapons, a jet pack, and his furry best friend, Timber. Be sure to pull the trigger for the mysterious and dangerous Snake Eyes ULTIMATES! Figure for your G.I Joe collection!
Accessories include:

G.I. Joe’s Field Commander, Sergeant Conrad S. Hauser – better known as Duke – knows multiple languages, but the one he may be most fluent in is the language of kicking Cobra tail! This made-to-order 7-inch scale fully articulated G.I. Joe ULTIMATES! figure of Duke comes with interchangeable heads and hands and a variety of accessories, allowing you to create many of your favorite cartoon and vintage toy looks. A leader among leaders, the Duke ULTIMATES! figure is a great way to start building your G.I. Joe team! Accessories include:

Every good story needs a villain, and Cobra Commander is the kind of egomaniacal archvillain legends are made of. This made-to-order 7-inch scale fully-articulated G.I. Joe ULTIMATES! figure of Cobra Commander comes with interchangeable hands- one holds a cobra wrapped around the Earth, which you may recognize from a video game commercial- and a variety of accessories, including multiple weapons, his snake scepter and soft goods cape, and more! You’re going to love the Cobra Commander ULTIMATES! figure as much as he loves the sound of his own voice, and that’s a very high bar. Accessories include:

They may lack the over-the-top dramatic flourishes exuded by many of Cobra’s notable characters, but Cobra Battle Android Troopers (B.A.T.) more than make up for that in their ability to unleash pure battlefield carnage and mayhem! The made-to-order 7-inch scale fully-articulated G.I. Joe ULTIMATES! figure of the Cobra B.A.T. comes with interchangeable heads and hands, and a variety of accessories, including battle damaged pieces, weapon attachments, multiple guns and more! Dr. Mindbender’s creation may give the G.I. Joes nightmares, but the Cobra B.A.T. ULTIMATES! figure will be a dream to have in your collection! Accessories include: