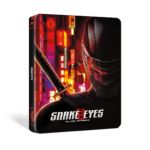 Despite ViacomCBS CEO Bob Bakish stating that the company will stick to its 45-day theater-to-home window, Snake Eyes: G.I. Joe Origins Home Release has been delayed to October 19th from its original September 6th date.

A new press release highlights the updated release date along with the links to previously known versions of the movie:

“An origin story that sheds light on the background of the most mysterious member of the elite US counterterrorist team, “GI Joe.” Snake Eyes saves the life of a very important member of an ancient clan of Japanese ninja warriors and is invited to learn their guarded secrets. He finds home and belonging among them while improving upon his already exceptional natural gifts. Unfortunately, revelations of a troubled past threaten his happiness amongst his adopted “family” of warriors, and he must reckon with questions of loyalty and allegiance.”

You can pre-order the home release from the following links: