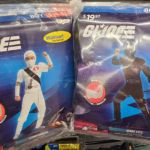 A while back, we reported that Disguise Costumes has manufactured Haloween costumes based on Snake Eyes: G.I. Joe Origins movie. It so happens that the company has now released a Walmart Exclusive line of G.I. Joe-related Haloween costumes titled as ‘Retro Line‘.

We do not think that it’s a mere coincidence that the Walmart Exclusive line is called Retro Line when the toy counterpart is also named the same. However, the packaging is decorated with Classified Series Snake Eyes and Storm Shadow.

Each costume is priced at $19.97 and can be purchased via Walmart’s Official Website or at physical stores.