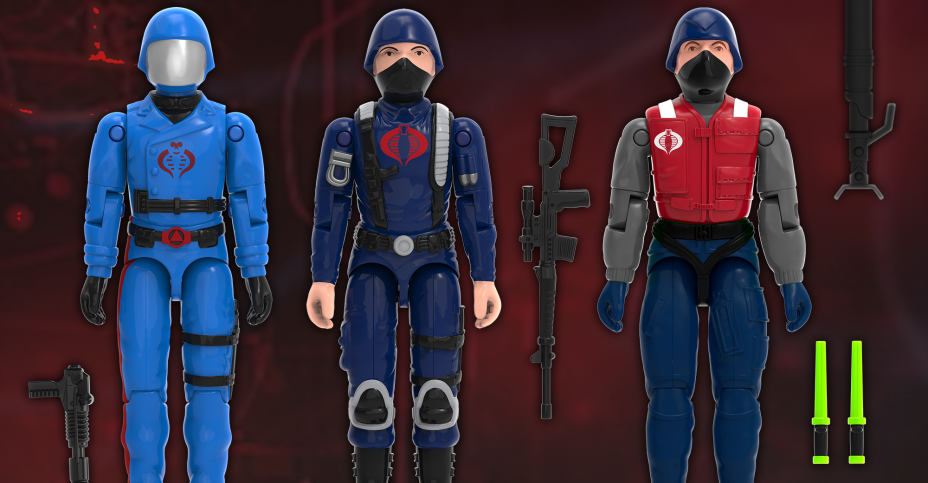 I Will Avenge This Insult!

You thought you could get away with creating a G.I. Joe super offering without Cobra knowing?! You fools, you forgot to make it super! What nitwit conceived of this abhorrence?! They’ll live to regret it! Cobra Commander is here, and I’ll show the Joes how it’s done! Cower in fear, the Skystriker is Cobra’s now!

I, Cobra Commander, have successfully hacked your HasLab! I’ve been lying in wait, and what better time to strike than now, Cyber Week! Oh yes, you thought you were so smart. Give the people another G.I. Joe Skystriker – that’s what they really want. Well, it isn’t! Every nincompoop knows that Cobra is the most powerful force in the world! The Skystriker is ours now, and there’s nothing you can do to stop us. We’ll keep your original puny offering intact… but now you’ll also have superior figures and decals from Cobra! Not only, is it I, the most fearsome and handsome Cobra Leader, but I’ve brought my own nefarious Cobra Pilot and a Cobra Ground Crew member to take the Joes down. Together we’ll cover the Skystriker in our very own Cobra decals. What can you do to stop us?! NOTHING. AHAHAHAHHAHA. Go to HasbroPulse.com and fund this IMMEDIATELY or there will be consequences! Cobra strikes again!

Isn’t that cute. Your precious Scarlett and Duke climbing into the cockpit of the Skystriker together. Disgusting! No Joe gets access to this Cobra Skystriker! You won’t either if you don’t fork over the cash. I didn’t just bring my expert Cobra Pilot and [Snake] Pit Crew member here for the fun of it. Make this worth my time, you imbeciles!! I have better things to do like take the temperature of the North Pole. Don’t worry about why, you’ll find out soon enough!

You’re still going to get everything you’d get with the Joe’s version of the Skystriker, but now you’ll get even MORE! Because Cobra is BETTER!

An o-ring figure of ME will now come with this offering. What an honor for you to display the greatest Cobra Commander that ever lived on your shelves. This rare 1980s variant of me was undoubtedly the best variant ever made!
I’ve brought an o-ring Cobra Pilot in Sunbow colors with me to fly this COBRA Skystriker, and an o-ring Cobra [Snake] Pit Crew member with his very own flags to take control of your beloved Pit. It’s the Snake Pit now, Joes!
To complete your Skystriker transformation, I will supply you fools with Cobra decals.
Finally, an offering worth backing!

And don’t worry, you’ll still get all of this other stuff the “heroes” promised you