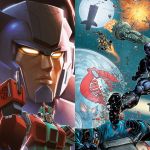 Mr. Kelly confirmed that IDW would indeed lose the rights by the end of 2022. However, he declined to divulge the name of the new license holder.

“Actually, we’re in a bit of a transition at the moment, as you might have heard,” Kelly tells Nerd Reactor. “So we’ve been with IDW on the comic book front, with Transformers and Joe, and that’s going to be ending at the end of this year. We’re not ready yet to announce who our new partner is, but we’ve already begun some creative discussions.”

Both brands will step into a new direction after the transition.

“Certainly there’ll be plenty of things that they’ll be familiar with,” Kelly continued. “Because again, we’re not going to completely reinvent the brands, but I think what they’ll find is a fresh take on the storytelling and the characters. Probably develop a little bit more slowly to try and bring some new fans in as well as by starting out focusing on two or three main characters and really giving them a lot of depth and a lot of personalities and then building out the team of characters as we go along. So yeah, that’s usually what we do.”

Regarding creative decision-making from Hasbro’s side:

“In some regards, we will do adaptations of TV or movies, obviously, but a lot of what we’re doing is actually original storytelling,” Kelly explained. “As far as toys are concerned, we at times will try to incorporate some of the artistic designs of toys. But it’s important to us that the integrity of the storytelling always be what’s driving the narrative. So we’re never going to just say, ‘Oh, well, you know, Hasbro is releasing a new toy, so we’ll put it in this comic, like an advertisement.’ We don’t do that.”

“When it comes to the kids’ properties, we tend to try and use the main characters that fans are familiar with,” Kelly said. “If there’s anything that we would do, we would focus more on the heroism or on the adventure of it – less on the violence side. So we really want to craft that message so that kids are reading the stories that they’re ready for, and that their parents are going to be happy that they’re reading as well. What it is about is just making sure that it’s accessible. So certainly, you know, Bumblebee would be a character that we would focus on for a younger audience, because he’s everybody’s best friend, and it tends to resonate well with kids. If we do bring in Decepticons like Starscream and Megatron, we might play them a little bit more, sort of over the top – not humorous necessarily, but scary.”