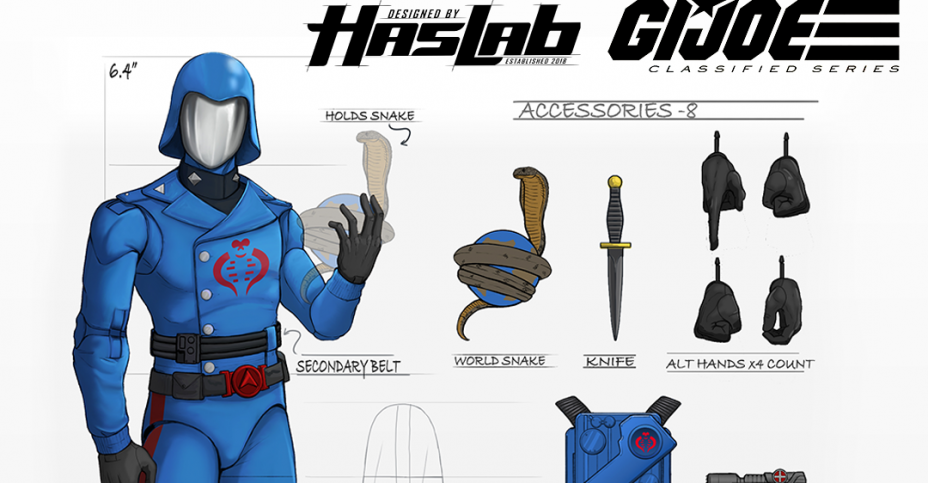 This G.I. Joe Classified HasLab campaign has been quite a roller coaster of a journey, hasn’t it, my faithful acolytessss? Every step of the way, you’ve surpasssssed all my expectations demolishing the initial offering and each unlock tier in record time. Your customizable H.I.S.S. now includes the base vehicle offering with H.I.S.S. Driver Action Figure, Early-Bird H.I.S.S. Tactician Action Figure, removable MALHISS Missile Racks, Retro canopy and tread covers, the newly-recruited H.I.S.S. Gunner Figure, the HISSINTEGRATOR CANNON, and two HISSRUPTOR ZX-5 BLASTER accessories. That’s cause for a celebration, and this year is the perfect time for a celebration in honor of me, COBRA COMMANDER! 2022 markssss my 40th Anniversary, and I want to commemorate that occasion with a trophy to my greatness.

If the HasLab campaign reaches 16,000 backers, you’ll unlock the Classified Upgrade #4 – a 6-Inch Scale Retro Cardback Cobra Commander Action Figure inspired by the rare missssprinted variant of my original 1982 “Real American Hero” figure release. Why Retro Cardback, you may ask? BECAUSE I’M the leader of this club. This figure is made for me! I want to be able to see my shining helmet through the blisssster pack and revel in my ressssplendent portrait.

Such a momentous depiction can’t posssssibly be slapped together with reussssed parts and pieces. I recently “sequesssstered” the HasLab team and insisted they create an all-new sculpt to capture me in all my 1980s glory. I’m certain it will inspire future statuessss and monuments throughout the world. My figure comes with 8 accessories including alternate hands, a backpack holster for my venom blaster accessory, and a miniature globe with my pet cobra. It’s a small world, but I will wrap my coils around it and squeeze it into total submission. Plus you can pose my figure astride the tail board at the rear of the H.I.S.S. as we roll on to victory!