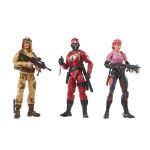 Speaking to Kidscreen Magazine, Hasbro is highlighting that they will change their toy distribution strategy. This news comes just a couple of days after the news of their change to future entertainment plans.

While easily applicable to kid-oriented lines, it is unclear how this new strategy will affect collector-specific lines such as Transformer: Studio Series, Transformers: Legacy, G.I. Joe: Classified, etc.

But in business, challenges often bring opportunities. That’s the lens through which Marianne James, Hasbro’s VP of EMEA and Asia, sees the current landscape.

“Tried and tested models still have their place, especially when you’ve got a Consumer Products program that leans on core pillars like toys and games,” says James. “What is interesting now is that we can test and learn. Instead of dropping products based on seasons, we’re now looking to where a rollout could be more relevant to a culture in one of our specific markets.”

One way Hasbro has shifted its strategy to accommodate the “highly unpredictable” nature of the market is to space out product releases in smaller waves instead of releasing the entire range in one large launch, she says. This provides the ability to establish contingencies if logistical issues occur in the company’s supply line.

“If the content is pushed back and we experience a delay at retail, or there are problems getting product on the water, it’s better to be flexible and have a softer, more phased-out launch instead of using a big, all-encompassing 360 strategy,” says James.

This is especially important for Hasbro’s “vault” brands such as Transformers, Peppa Pig, and My Little Pony, which exists in highly competitive toy categories, most notably preschool. To have a major rollout fall flat due to timing problems is not an option, so the company is expanding its arsenal of marketing and engagement tools, she says.’

Based on the above, Hasbro is planning to establish smaller waves and shift content accordingly. This new strategy can already be seen with the release of Transformers toys for the upcoming movie, Rise of the Beasts. With the production company Paramount Pictures delaying the release date, Hasbro is repackaging the toys while omitting ROTB branding. Transformers: Rise Of The Beasts Smash Changer Optimus Prime is repackaged into Cyberverse (Transformers: Bumblebee – Cyberverse Adventures – Dinobots United – Smash Changer Optimus Prime), while Transformers: Rise Of The Beasts Energon Igniters 2-Pack is repackaged into Buzzworthy Bumblebee (Transformers: Buzzworthy Bumblebee Energon Igniters 2-Pack).