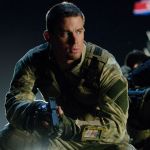 Speaking to Variety, actor Channing Tatum stated that he asked the creative team to kill off his character, Duke, to avoid being committed to the G.I. Joe Live Action Movie Franchise.

“Look, I’ll be honest. I fucking hate [G.I. Joe: Rise of Cobra]. I hate that movie,” Tatum previously told Howard Stern about the first “G.I. Joe” film. “I was pushed into doing that movie. From ‘Coach Carter,’ they signed me to a three-picture deal…They give you the contract and they go, ‘Three-picture deal, here you go.’ And as a young [actor], you’re like, ‘Oh my god, that sounds amazing, I’m doing that!’ Time goes by and you get other jobs and you’re building your quote and you have a dream job you want to do. And … the studio calls up and they’re like, ‘Hey, we got a movie for you, we’re going to send it to you.’ And they send it to you, and it’s G.I. Joe.”

Tatum continued, “And I love G.I. Joe: ‘Can I play Snake Eyes?’ And they’re like, ‘No, you’re not playing Snake Eyes, you’re playing G.I. Joe.’ The script wasn’t any good… And I didn’t want to do something that I… was a fan of since I was a kid and watched every morning growing up — and didn’t want to do something that was, one, bad and, two, I just didn’t know if I wanted to be G.I. Joe.”

“The first one I passed on seven times, but they had an option on me and I had to do the movie,” Tatum said. “So the second one, I obviously just didn’t want to do that one either.”

Tatum confirmed he asked to be killed off in the first 10 minutes of the sequel, 2013’s “G.I. Joe: Retaliation,” to avoid any further commitment to the franchise. Did he regret that decision? “No,” he said bluntly.

Channing Tatum Asked For His Character To Be Killed-off In G.I. Joe: Retaliation - Additional Images

Join the Conversation! › Channing Tatum Asked For His Character To Be Killed-off In G.I. Joe: Retaliation Discussion